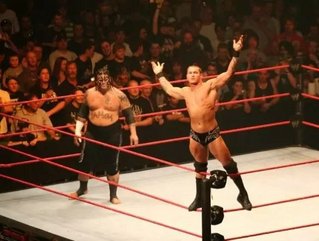 Rogers has entered the ring through a ten-year agreement with World Wrestling Entertainment that will give the cable giant exclusive broadcast and distribution rights to existing WWE programming such as Raw, Smackdown and pay-per-view events.

The company will also take over the WWE Network, a wrestling channel that made its debut in the U.S. in February.  Thus far, the channel has been marketed as “the Netflix of wrestling,” in which subscribers pay $9.99 a month to have access to wrestling-related programming such as reality shows, archival content and live monthly pay-per-view events.

Unlike its U.S. incarnation, Canada’s WWE Network will not initially be available as a standalone service.  Viewers will have to first subscribe to a TV provider and then pay an additional fee to access the channel.

David Purdy, senior vice president of content at Rogers, commented on the subscription service by saying, “This is not about us preventing access or throttling access to the channel. What we plan on doing is exploding access to this channel.”

Rogers has yet to finalize pricing, but they intend to keep it close to the current cost.  At present, WWE charges subscribers $9.99 a month if they agree to a six-month commitment or $19.99 per month with no lock-in.  So far, the service has amassed some 700,000 subscribers, with many of them praising its value.  When purchased individually, WWE’s monthly pay-per-views can cost upwards of $40 each.

The WWE Network will also be available through Rogers’ apps, enabling subscribers to view it on their smartphones and tablets.

In regard to the future, Purdy did not rule out a standalone option that would allow viewers to access the channel without having to subscribe to a TV provider.  Fans may eventually be able to get Jake “The Snake” Roberts without Damien The Python.

“We’re always looking at making products and services that appeal to youth and young adults. We’re going to do whatever it takes to have relevant subscription products for them,” he said. “We’ll make sure there are more people subscribing on a per-capita basis to the WWE service than there are in the U.S.”

Both companies remained mum on the financial terms of the deal.

The purchase is a smart one for Rogers, as the company will be locking in programming that viewers want to see live instead of on DVR or on demand.  The length of the deal also bodes well for Rogers, as it allows ample time for development and expansion of viewership.

“If it’s a two-year renewal or a three-year renewal, you’re not really making the medium- and long-term investments necessary to grow both businesses,” Purdy said. “If it’s too short, that’s not a partnership, that’s speed dating.”