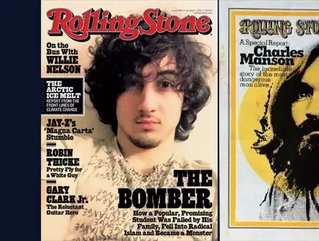 Rolling Stone Magazine is gaining a very notable amount of press this morning, by putting Boston Marathon bombing suspect Dzhokhar Tsamaev on its cover, in a very glam shot that critics claim continue to blur the lines between fame and infamy.

The picture, accompanied by a story titled “Jahar’s World,” portrays the accused suspect in a model like state with long curly hair, which is reminiscent of rock royalty like the Doors Jim Morrison.

The front cover has a bold label entitled “The Bomber” and has been met with tens of thousands who have vowed to boycott the magazine on a related Facebook page since Rolling Stone unveiled their controversial cover. Many are calling the decision shameful and sickening, claiming it glorifies an accused killer.

More than 11,000 have stormed the magazine’s direct Facebook page leaving nasty comments and some have vowed to cancel their subscriptions.

This is not the first time an accused murderer has donned the cover of Rolling Stone. In 1970, Charles Manson’s faced stared out from the pages, causing its own set of issues and protests. The magazine survived, but that is before the power of social media and the renewed strength of Boston behind the protests.

Rolling Stone has yet to comment publicly on the decision to put Tsarnaev on the cover, which recently featured actor Johnny Depp and singers Rihanna and Justin Bieber.