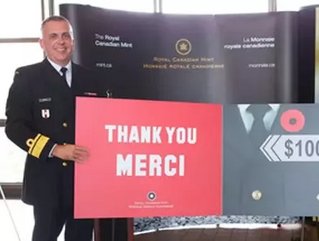 When launching the 25-cent collector card last October, it was announced all profits would be donated.

"Canada's veterans and active Canadian Forces members deserve recognition for their courageous deeds and the Mint has been honoured to pay them tribute through a great variety of collector coins," said Ian E. Bennett, President and CEO of the Royal Canadian Mint.  "By giving back the proceeds of its 2010 Poppy Collector Card, Royal Canadian Mint, Canadian Troops, Military Families Fund, donation, Canadian mint, Canada mint, Canadian forces, the Mint is pleased to extend its thanks by donating funds which will help today's military families cope with their own sacrifices."

On October 25th, 2010, the Royal Canadian Mint launched the 2010 coloured 25-cent poopy circulation coin in honour of the 65th anniversary of the Second World War end.  At the same time this commemorative coin was launched, the Royal Canadian Mint also released a Remembrance Day Collector Card that could hold the 2010, 2008 and 2004 poppy circulation coins.

"The Military Families Fund has helped over 700 families in their times of need," said Rear-Admiral Andy Smith, Chief Military Personnel. "This generous donation is a direct reflection of the support of Canadians and Canadian society to our military members and their families."