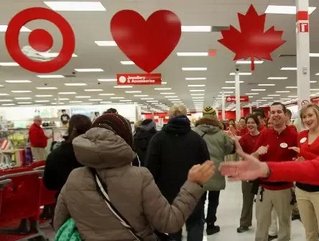 In March, Target opened its first Canadian stores in southern Ontario. Canadians flocked to new stores and pleasantly surprised Target Corp by exceeding the Companies project sales for the first quarter. The overall profits of the chain reported a 26 per cent drop.

Chief Financial Officer John Mulligan says, “Whenever we open a new store in the U.S., there is a rush of traffic and sales as curious guests shop it for the first time. But the rush in Canada exceeded our expectations.”

The Canadian store produced $86 million (USD) in sales despite the fact the stores were open just over half of the quarter that ended on May 4.

The biggest sales were seen in the home and clothing categories, which didn’t surprise the Company as statistically customers tend to gravitate toward those sections on their first trip to Target.

Two weeks ago, Target opened a second wave of 24 Canadian stores in Alberta, Manitoba and British Columbia. The Company plans to open 20 more stores later this quarter, and if everything goes correctly by the end of 2013 there will be 124 Target stores nationwide.

“This means we expect to open more Target stores in our first year in Canada than we opened in our first 10 years in the United States,” said Mr. Steinhafel.