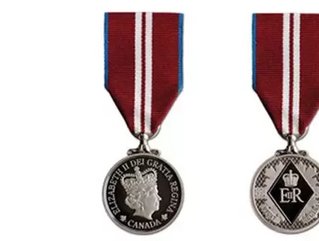 Throughout 2012, an astounding 60,000 deserving Canadians will be recognized for this high honour.  Today’s ceremony was presided over by Governor General of Canada David Johnston and Prime Minister Stephen Harper distinguishing sixty Canadians at Rideau Hall.

“The recipients who are honoured by this medal have made Canada better,” said His Excellency. “Individually, they have improved the well-being of many in our communities, and together, they have helped to create a smarter, more caring nation. They represent a mosaic of individual experiences and accomplishments. Like Her Majesty, they inspire others to take up the call to service.”

To be eligible for such an honour, those recognized must either be a Candian citizen or permanent resident of Canada, have made significant contribution to a particular province, territory, region or community in Canada or have an achievement abroad that credits Canada and be alive on February 6th 2012.

The medal was designed by the Canadian Heraldic Authority and manufactured by the Royal Canadian Mint. It displays the crowned image of Queen Elizabeth II on the front, with recognition of the sixtieth diamond anniversary of her Sovereign’s accession to the Throne on the reverse.