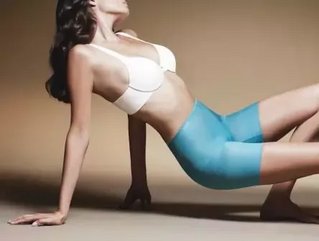 It all started with one woman’s determination to banish the infamous foe of round derrieres affecting women the world over: unsightly panty lines. Now Sara Blakely, the creator of the slimming undergarment line Spanx, has become the youngest self-made female billionaire according to Forbes’ yearly list of the world’s richest people released Wednesday.

What began as a quick-fix under white pants – cutting the feet off control top pantyhose for a night out – has become the answer to millions of women’s everyday fashion catastrophes.

Gracing Forbes Magazine’s second cover of the issue, the 41-year-old laughs, insisting the surreal experience has left her feeling like her picture is a fake mock-up created at a mall kiosk when she spoke on “CBS This Morning.” Started with a paltry $5,000 in 2000, the Spanx brand was recently valued at $1 billion.

Shapewear and hosiery, a far cry from the lacy delicates modeled in the Victoria’s Secret ads, is not the most exciting product to market, and Blakely says, “I think the name ‘Spanx’ brought a lot of humor and life to it.” The once-bashful topic has become a part of everyday banter between girlfriends and the products feature empowering names like Bra-llelujah and Power Panties, the Spanx top seller and go-to shapewear for over 6 million women.

With no formal advertising, the popularity of the line was boosted through word of mouth, and the general public quickly became familiar with the miracle underwear after Oprah featured it on the “Favorite Things” segment of her show. Celebrity mentions, including the consistently svelte-looking Gwyneth Paltrow, further boosted sales.

Now officially basking in the limelight, Spanx has grown to include swimwear, activewear, and a newly added men’s line.

"I've always had that gratitude that I had the opportunity to pursue my potential," Blakely said, speaking about the ability to become a successful female entrepreneur in the U.S. "So I think my story says that, when women are given the chance and the opportunity, that we can achieve a lot. We deliver. We can make the world a better place, one butt at a time."