Stronach to Step Down as Magna Chairman 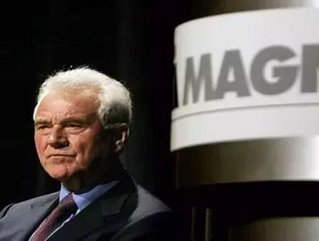 Magna International founder and chairman Frank Stronach will step down after the company’s May annual meeting. Keeping a seat on the board to provide strategic guidance, Stronach’s new position will be honorary chairman.

Stronach’s plans to step down revolve around restrictive government rules. “One of the factors influencing the decision to give up voting control of Magna was the increasingly restrictive rules governing the management of companies. I believe regulators have put in place excessive rules that stifle the market's creative forces – namely, the innovative managers, entrepreneurs and inventors who are the engines of new wealth creation,” said Stronach in a letter included in the 2010 annual report.

Stronach founded the Aurora, Ontario based company in 1957, and has been on the board since 1968 becoming chairman in 1971. Last August Stronach gave up control of the company in exchange for $1 billion in cash, newly issued stock and other benefits.

"This is a significant change in the ongoing evolution of Magna, but we are fortunate to still have the continuing benefits of Frank's insight and advice," Mike Harris, Magna's lead director, wrote in a shareholder letter.

The new chairman will be chosen from existing directors and the board will be restructured to consist of 10 directors with eight independent members. Stronach will continue to play a management role with Magna E-Car Systems.

Magna International was originally started in Stronach’s Toronto garage as a small tool and die shop, and has expanded into one of the world’s largest auto parts supplier.