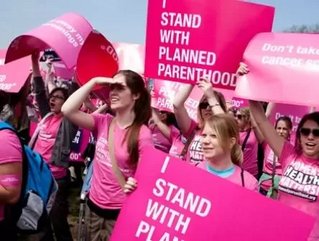 The Susan G. Komen Foundation has been under fire from supporters of Planned Parenthood after it announced Tuesday that it would cut funding to the organization, which provides abortion and birth control services in addition to basic screening and education about breast cancer.

On Friday morning, the foundation backed off of that decision and said in a blog post that it would continue to provide grants to Planned Parenthood.

“We want to apologize to the American public for recent decisions that cast doubt upon our commitment to our mission of saving women’s lives,” the foundation said. “The events of this week have been deeply unsettling for our supporters, partners and friends and all of us at Susan G. Komen. We have been distressed at the presumption that the changes made to our funding criteria were done for political reasons or to specifically penalize Planned Parenthood. They were not.”

When word got out that Komen would be pulling grants from Planned Parenthood, which recently totaled over $600,000 a year, critics and women’s rights groups accused the organization of pandering to anti-abortion groups. Initially, Komen said that it made the decision based on a pending investigation by a member of congress into whether Planned Parenthood funded abortions with public money. Then on Wednesday, the organization posted a statement and video from founder and leader Nancy G. Brinker in which she said that the decision was part of an effort to use its money more efficiently.

Public outcry extended across the nation, even within the Susan G. Komen organization itself. All of the organization’s seven California affiliates released a statement saying that they did not support its decision. New York Mayor Michael R. Bloomberg pledged $250,000 to help Planned Parenthood make up the loss.

“Politics have no place in health care,” Bloomberg said in a statement. “Breast cancer screening saves lives, and hundreds of thousands of women rely on Planned Parenthood for access to care.”