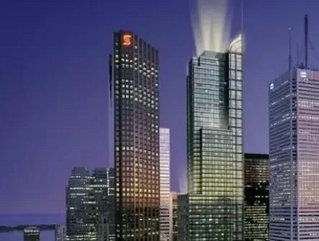 The Trump luxury hotel brand is jumping on the Toronto tourism bandwagon with the opening today of the Trump International Hotel & Tower. This C$500 million ($498 million) tower brings Toronto’s five-star hotel count up to five: the Four Seasons, the Ritz-Carlton, the Hazeltton, the Shangri-La and now the Trump Tower.

The Trump Tower is Canada’s tallest residential tower with 65 stories and 900-foot spire looming above Toronto’s Downtown financial district. The 261 hotel rooms offer guests exquisite views of the city as well as sumptuous luxury accommodations ranging from 550 to 4,000 square feet. The major differentiator is the hotel’s offering of the trademarked Trump Attache services, which provides “comprehensive business and personal concierge services” according to the Trump Toronto Hotel website.

Trump Tower also has 118 residential condo units which have been somewhat popular, with only 40 percent left to buy. The average price ranges from C$2.3 million to C$6.3 million, according to Talon International Development Inc., the owner and developer.

As Toronto’s tourism numbers rise--according to a Tourism Toronto press release, over 9 million hotel-room nights were sold in 2011—luxury hoteliers are setting up shop in the city to compete against each other for high-priced guests.

Although this is a good sign for Toronto and the Canadian tourism industry in general, there is no guarantee that the elite will continue to patronize the city.

Critics wonder if there will be enough high-classed and high-paying demand to keep all of the new luxury hotels in the black.