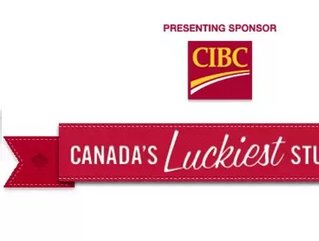 Student Life Network, creators of Canada's Luckiest Student contest, announced a new partnership with Universal Music Canada today that sees Canada’s leading music company adding exciting and exclusive prizes to the contest. Now with over 150,000 participants, Canada's Luckiest Student contest has seen incredible growth thanks in part to partnerships with popular corporations and brands as well as a rock-solid contest architecture that is still very innovative in the world of social media.
As part of its sponsorship, Universal Music Canada will give students a chance to win a meet and greet with Taylor Swift on June 29 in Vancouver. Universal Music Canada has joined leading brands including CIBC, Dell, itravel2000 and Mexx as a sponsor of Canada’s Luckiest Student. Total prizes offered through the contest, to date, are evaluated at $36,000 with new prizes expected regularly until the contest ends on June 15, 2013.
“Students appreciate the value of experiences, of defining moments that create memories and joy, especially among larger groups and communities,” said Kristen Burke, Sr. Director, Brand and Strategy at Universal Music Canada. “That is what Universal is about and this contest truly reflects this philosophy. The traction that this campaign has received is stellar. We’re excited to join the search for Canada’s Luckiest Student and to have the opportunity to engage students in a very powerful way.”
With an average of 15,000 new students joining the contest each week, the company expects to exceed its goal of 400,000 entries by June. Since the soft launch of Canada’s Luckiest Student in September, more than 150,000 students have enrolled; its Facebook ‘likes’ now top 70,000 and Twitter followers are at more than 66,000.
“The contest continues to grow each day and the feedback is overwhelmingly positive,” said T.J. Donnelly, president and CEO of the Toronto-based Student Life Network. “We’re excited to be adding Universal Music Canada to our list of sponsors and believe that they are bringing some great prizing that students will enjoy.”
To take part in Canada’s Luckiest Student, participants receive multiple entries based on easy actions, such as enrolling, opting-in for new prizes and sharing information on the contest with friends. Not only does the contest reward a single person, but it also rewards networks of people with each participant required to choose classmates, friends and even their school as partners with whom they would like to share collaborative prizing.
Canada’s Luckiest Student ends June 15, 2013 with new partners and prizing being added regularly. The contest is open to a total pool of 4 million high school and post-secondary students in Canada.
Edited by: Kristin Craik
Canada's Luckiest StudentCanadian contestStudent Life NetworkUniversal Music
Share
Share