USAWeek2013 to be held in Spain 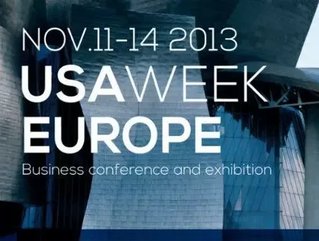 During four days, the US will present to Europe the predicted investment for the most relevant projects planned in the coming years, in the areas of energy, infrastructure, technology, automotive and aerospace. The Guggenheim Museum in Spain will host this unprecedented event, targeting large European companies, institutions and investors with a special interest in the North American market.

Bilbao will host the USAWeek2013, the first US business conference and exhibition in Europe, aimed at boosting the cooperation, establishing business relationships and fostering transatlantic investment between both continents.

This unique business event focuses on promoting innovation and the interaction between companies, business associations and European and North American institutions, allowing attendees to understand the key pillars of the US economy and identify the most active sectors, their strategic business lines and major projects planned for the coming years -in which approximately over 120 billion US Dollars will be invested- offering attractive business opportunities for large European companies and investors.

Supported by the European American Enterprise Council (in collaboration with the Basque Government- SPRI and the support of the City of Bilbao), the USAWeek2013 will be held at the Guggenheim Museum and its agenda will illustrate the state and national trends and investments in the United States planned for the coming years in the infrastructure (water projects, high-speed roads, airports and urban transport), energy (solar, wind, shale gas), industry, - where the automotive and aerospace sectors lead the growth- technology and innovation sectors.

USAWeek2013 will count on key American speakers connected to the various sectors and projects detailed, such as the Virginia Secretary of Transportation -Sean Connaughton-, the AMTRAK – NEC Chief Corridor Development –Robert LaCroix-, the CEO of the Philadelphia International Airport –Mark Gale-, or the member of the California Water Commission -Danny Curtin-, among many other official, sectorial and business representatives, that will explain in depth the trends, projects and investment forecasts of the US market for the next decade.

Germán Loperena, USAWeek Director, stated, "this forum can be a great opportunity for large European and Spanish companies, to contact with the directly responsible of the decision-making bodies for the key projects in the U.S. industry. The U.S. market is a competitive and complex one, yet very open and committed. Loperena assures that "the biggest barriers to entry are here, not across the Atlantic, and to overcome them requires organizations to commit to the market, based on a strategic vision for long-term investment."