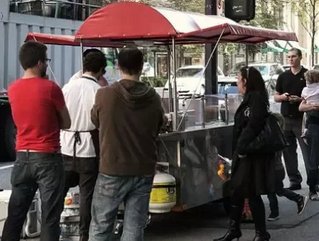 It’s the year anniversary for Vancouver’s food cart program that opened more space for food vendors throughout the city. Starting with only 17 vendors, the street carts have successfully expanded to 97 with more expected in the future.

Mayor Gregor Robertson said in a news release about the program, “Since expanding our street food program last year, we’ve broadened the range of available food options to offer the kind of diverse, tasty and nutritious food people told us they wanted. We are proud that Vancouver now has a selection of street food that represents the cultural diversity and the culinary skill of our city."

To measure the program’s success, Vancouver asked for citizen feedback through an online survey that attracted 2,000 responses.

The program, since February 2011, has added 19 new carts this year and its plans for expansion include 15 new street food vendor locations in Vancouver a year for the next three years. Vendors offer a variety of fast culinary options including tacos, soup, crepes, and more.

Those interested in knowing their food cart options can download a free iTunes app called Street Food Vancouver which touts itself as “a great way to explore Vancouver's growing selection of street food vendors.” The app lets users know which food carts are nearby, which are the most popular and their hours and contact information. The app also features menu saving for easy access. Vancouverites can find the app here:  Street Food Vancouver