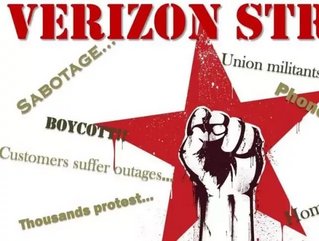 About 39,000 Verizon landline and cable workers on the East Coast went on strike Wednesday morning after little progress in negotiations since their contract expired nearly eight months ago.

For the past 10 months, Verizon has tried to reach agreements for the Company’s 39,000 wireline associates in the East. Whilst Verizon has tabled proposed wage increases, continued retirement benefits (including a generous 401(k) match) and excellent healthcare benefits, union leaders decided to call a strike rather than sit down and work on the issues that need to be resolved.

“It’s regrettable that union leaders have called a strike, a move that hurts all of our employees,” said Marc Reed, Verizon’s chief administrative officer. “Since last June, we’ve worked diligently to try and reach agreements that would be good for our employees, good for our customers and make the wireline business more successful now and in the future. Unfortunately, union leaders have their own agenda rooted in the past and are ignoring today’s digital realities. Calling a strike benefits no one, and brings us no closer to resolution.”

Over the past year, Verizon took extensive measures to ensure its customers would be minimally impacted by any potential work stoppage. Thousands of non-union Verizon employees and business partners have undergone extensive training in various network and customer service functions, including FiOS and copper repair and network maintenance and general customer service functions.

Verizon Communications Inc. has a total workforce of more than 177,000 employees. In its statement, the company said it had been willing to participate in mediation if the unions extended their strike deadline, but that the unions instead called a strike.