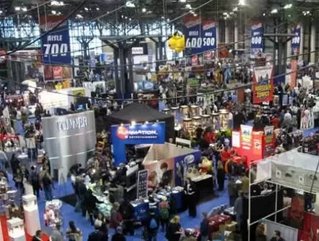 San Diego's Comic-Con International has come a long way from its humble beginnings as the "Golden State Comic Book Convention" in 1970. It's now widely regarded as one of the country's premiere multi-genre conventions, hosting over 100,000 attendees annually. In fact, this yearly showcase of the comic book, science fiction/fantasy, film/television and pop culture industries is the largest convention across the Americas and the fourth largest in the entire world.

Officially, Comic-Con kicked off last night with a special preview for industry professionals, exhibitors and pre-registered guests, but the official convention carries on for four days--Thursday, July 12 through Sunday, July 15.

We're heading down to the San Diego Convention Center to cover this mega-production and will be bringing you updates and insights throughout and after the event.

Stay tuned for all of our coverage!