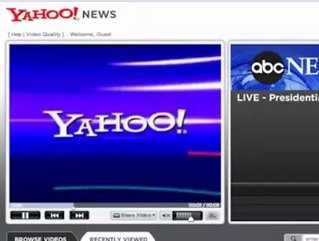 Yahoo Inc. has just announced that it will feature more ABC news content on its website and will partner with the network on a web-based original series to boost up ad sales while promoting the welfare of the search engine that seems to be failing against the likes of Google and Bing. The company announced Monday morning that ABC will be the premier news provider for Yahoo News and that a “highly interactive” version of ABC’s popular “Good Morning America” will appear on the website.

Executives believe that the combined efforts will reach more than 100 million users; Yahoo news staffers will appear on air at ABC. Extended interviews and other content will also be available on the site, the Wall Street Journal says. ABC is also looking to promote its online presence as a digital news resource so the partnership seems to be a win-win for both companies.

Yahoo has been working to overcome its declining search advertising business and the company’s restructuring efforts have been rather lackluster. Yahoo is still looking for a new chief executive after former CEO Carol Bartz was given the boot last month.

To kick off the new original interview series, Yahoo.com and ABCNews.com will launch a live stream of “Good Morning America” on Monday with anchor George Stephanopoulos interviewing President Barack Obama at the White House.