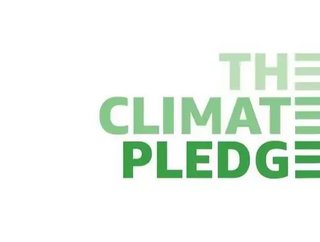 From financial services to technology and construction, 20 new firms have signed up to Amazon and Global Optimism’s climate pledge bringing the total...

Twenty new companies have joined The Climate Pledge, a commitment co-founded by Amazon and Global Optimism in 2019 to reach the Paris Agreement 10 years early and to be net-zero carbon 2040.

These 20 new signatories, which span both the geographical and business world, represent diverse economic sectors, ranging from energy and agricultural to financial services and hospitality and include companies and institutions big and small, established and new, from tech giant IBM to global forest industry leader UPM.

According to IBM, which has decades of environmental leadership under its technological belt, having issued the first-ever policy on environmental responsibility in 1971, “IBM aims to have net zero carbon emissions by 2030, before aspiration of the Paris Agreement, in line with our long commitment to the environment”, states Jim Whitehurst, IBM president.

This brings the total number of signatures to 53, with big brand names such as Microsoft, Unilever, Uber, Mercedes-Benz, Siemens, Verizon JetBlue and Schneider Electric, among others, ha ving previously taken a place at The Climate Pledge table, all sending an important signal that there will be rapid growth in demand for products and services that help reduce carbon emissions.

Delighted by the momentum behind the pledge, which encourages companies to reach the goals of the Paris Agreement 10 years early, Amazon’s founder Jeff Bezos, said he was “excited to welcome 20 new companies… who want to go ever faster”, particularly as the US =officially rejoins The Paris Agreement. “Together, we can use our collective scale to help decarbonize the economy and preserve Earth for future generations.”

Commitment to improving on the Paris Agreement

The 53 companies across 18 industries and 12 countries have committed to working toward net-zero carbon in their worldwide businesses, which in aggregate has the potential to significantly reduce corporate carbon emissions.

While each individual organization is at a different stage in its journey to net-zero carbon emissions, all 53 are committed to The Climate Pledge’s ambitious goal of meeting the Paris Agreement 10 years early, with each company implementing science-based, high-impact changes to its business to help decarbonize the value chain, including innovating in circular economy, deploying clean energy solutions, and mobilizing supply chains to reach net-zero by 2040.

Signatories to The Climate Pledge agree to:

● Measure and report greenhouse gas emissions on a regular basis.

● Neutralize any remaining emissions with additional, quantifiable, real, permanent, and socially-beneficial offsets to achieve net-zero annual carbon emissions by 2040 — a decade ahead of the Paris Agreement’s goal of 2050.