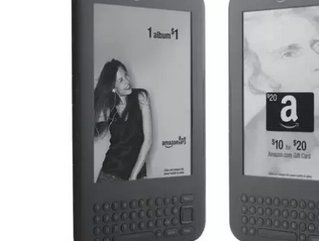 Amazon announced Wednesday morning a 3G version of its advertisement-supported Kindle with wireless access provided by AT&T. The device is dubbed the Kindle 3G with Special Offers and goes for a cool $139. It’s identical to the $189 3G Kindle except for the advertisements and deals used as a screen saver and on the bottom of its home screen.

"Kindle 3G is more convenient—customers never have to hunt for or pay for a Wi-Fi hotspot—they simply download and read books anytime, anywhere," Amazon CEO Jeff Bezos said in a statement. "Kindle 3G customers read 20 percent more books, and take advantage of twice as many special offers. A big thank you to AT&T for helping to make the new $139 price possible."

What’s nice about having AT&T on your side is that users will have 3G on the Kindle and that there are no annual contracts or monthly fees. Users can seamlessly connect to the web over Wi-Fi and AT&T’s 3G network making for simple downloads of books, magazines, newspapers, and blogs with storage space of up to 3,500 books. AT&T started selling the Amazon Kindle 3G in its retail outlets on March 6 and has been a popular force for the brand.

Amazon’s Kindle brand has been busy this year offering its Wi-Fi version with Special Offers in April, with a price tag of a mere $114. Its initial advertising partners included Visa, Proctor & Gamble, and Buick.