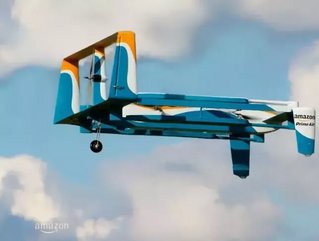 Online juggernaut Amazon caused a stir when it announced that it would be delivering packages in automated drones. The delivery program, called Amazon Prime Air, intends to be able to deliver packages to customers within 30 minutes of their order.

The announcement caused many to wonder just how exactly this system would function?

A Customized Delivery Program is in the Works

Amazon drones will be somewhat like a hybrid of an airplane and a helicopter. They’ll be around 55 pounds and able to deliver packages that weigh five pounds or less within a range of 10 miles. This works out well for Amazon, as many of the items they sell tend to weigh under five pounds.

The drones are in the prototype stage at this point, but different styles will be created based upon the weather conditions they will face. Different drone types will also be needed to serve different residence types, from rural farmhouses to apartments to high-rise condos.

The pricing of this plan hasn’t been established yet. While some consumers have speculated that the sight of drones in and around their cities will be off-putting, Amazon reps expect that it won’t take long for people to see the drones just as they do UPS or FedEx trucks.

The drones will be customized to Amazon’s evolving business model as well as consumer needs. Amazon intends that it be highly automated and very intuitive. However, buildings with locked entrances such as apartment complexes may have to designate an accessible space within a common area where all residents’ packages will be delivered.

The 30 minute delivery window is set to bring online shopping to new heights of satisfaction and convenience. Waiting a few days for a delivery might be fine for many items; however, drone delivery will satisfy those who simply can’t or don’t want to wait for their order.

While some details still need to be worked out with the FAA, Amazon is confident that its Prime Air program will one day be a reality.