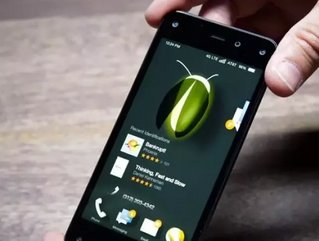 The recent release of Amazon’s highly anticipated Fire Phone marked the company’s debut in the smartphone market.  The Fire boasts an impressive array of features, including 3-D screen effects, free unlimited photo storage and a free year of Amazon Prime membership.  If the phone is a hit with consumers, Amazon should reach their goal of becoming a formidable competitor in the original equipment manufacturers market (OEM).  Currently, Apple and Samsung lead all OEMS, with Apple raking in 41 percent of the market share and Samsung claiming 28.  The next largest competitors—LG, Motorola and HTC—all have between five and seven percent of the market share.

Although the Fire is indeed Amazon’s first smartphone, the company has experience in the mobile hardware market, having introduced its Kindle Fire tablet back in 2011.  Amazon is currently the market leader in mobile shopping and buying.   The company clearly sees the opportunity to use the Fire to help accelerate growth in mobile commerce, which could be fruitful for businesses worldwide.

Bank of America has predicted that $67.1 billion in purchases will be made from mobile devices by shoppers in Europe and the United States in 2015.  Amazon has taken measures to ensure that some of those shoppers head their way.  By giving Fire users a free year of Amazon Prime membership - which offers free two-day shipping and discounts on thousands of products - the company hopes to hook members and turn them into more frequent Amazon shoppers.  The Fire comes with several pre-installed apps that facilitate mobile commerce for physical products and digital content, including Kindle Books, Amazon Music, Audiobooks and Amazon Appstore.

The Fire also has a unique feature called Firefly, which enables the operator to use the phone’s camera to recognize real-world objects, television shows, movies, and music and subsequently purchase the item or content from Amazon’s online store.  This is bound to take business away from brick-and-mortar retailers, many of whom are already struggling due to the influx of online shopping platforms.  Obviously, Firefly will only be lucrative if Amazon’s prices are truly competitive, and Firefly’s success may in turn cause retailers to lower theirs accordingly.

The Impacts of Mobile Technology

For some businesses, mobile technology plays an integral role.  Sage North America recently conducted its second annual mobile device survey, in which the supplier of business management software and services polled 1,090 small and midsized businesses in the United States.  The survey found that 54 percent supply their employees with mobile devices, down from 69 percent the previous year.  This could be due to the fact that as of January of 2014, 90 percent of American adults have a mobile phone and 58 percent of them own a smartphone.  It is likely that the majority of people would want to use one phone for business and pleasure rather than two separate devices.

When asked about the effect that mobile technology has had on their businesses, 70 percent of respondents said the most post positive effect has been on customer service.  32 percent of business owners found that mobile devices have been helpful in conducting business in the event of inclement weather.  21 percent responded that mobile devices have helped to bring work to the company, and 20 percent said that they enable the business to conduct meetings remotely.

Two notable features of the phone could potentially make conducting business more efficient.  The Carousel is an exclusive app viewer on the Fire’s home screen that places alerts and recently used apps front and center, delivering real-time updates so you can work directly off of the home screen.  For example, the Carousel allows you to read your most recent email messages from the home screen without even opening the email app.  You can also manage your appointments and access news without having to scroll elsewhere.

Additionally, the Fire automatically backs up the user’s notes, contacts, settings, apps and messages, eliminating the need to manually configure settings or link the phone to a computer.  Data is automatically backed up to the cloud every time that the phone sits idle.

This could be very helpful to business users who rely on their phones for data storage, and the effortlessness of the backup system will leave them free to return to business as usual.