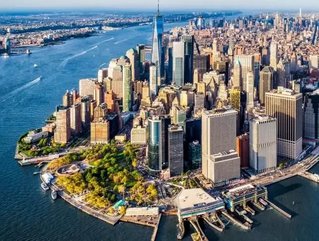 In a much-anticipated decision, e-commerce giant Amazon has named the location of its headquarters – in fact, two headquarters and an operations center – in the US.

It has chosen New York City and Northern Virginia for its next HQs and Nashville for a new Operations Center of Excellence. In total, the company will receive up to $2.2bn in performance-based incentives in the three locations it is building new offices.

Across the two headquarter locations, the company will invest $5bn and create more than 50,000 jobs, with a fairly even split across both locations.

The New York location is set to benefit from 4mn sq ft of energy efficient office space, which reportedly has the potential to increase to 8mn sq ft – this is set to bring an incremental tax revenue of more than $10bn over 20 years. If the company, as planned, creates 25,000 jobs in Long Island City, NYC, it will receive performance-based direct incentives totalling $1.525bn.

Bill de Blasio, Mayor of New York City, said: “This is a giant step on our path to building an economy in New York City that leaves no one behind. We are thrilled that Amazon has selected New York City for its new headquarters.”

Meanwhile, the Operations Center of Excellence in Nashville is set to create more than 5,000 jobs and will bring in $230mn of investment. The company, which now has three HQs in Seattle, NYC and Virginia, will therefore be investing a total of $5.23bn as of today’s announcement.

Jeff Bezos, CEO of Amazon, said: “We are excited to build new headquarters in New York City and Northern Virginia. These two locations will allow us to attract world-class talent that will help us to continue inventing for customers for years to come. The team did a great job selecting these sites, and we look forward to becoming an even bigger part of these communities.”