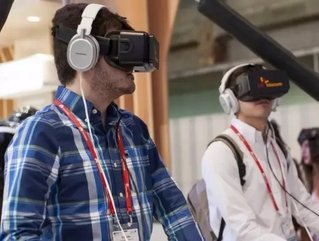 The revolution that virtual reality (VR) is set to bring is knocking on our doors. Between now and the end of 2016, three new VR headsets should be on the market. First, there will be, Taiwanese-owned, HTC’s Vive, which has been announced for release by the end of 2015. Following the Vive will be Facebook subsidiary’s Oculus VR’s Rift, announced for release in quarter one of 2016. Finally, the Japanese PlayStation’s Morpheus is slated for release between January and June of 2016. Supporters of VR claim—and considering the sea changes in mobile, there’s no reason to doubt them—that the technology will revolutionize gaming, film, entertainment, communication and more.

By the time the Morpheus headset is released, it will have been about 36 years that VR technology has been pushing to make a place for itself in the mainstream. The first efforts to popularize VR were in the 1980’s and 90’s but its limitations and high cost of production limited demand. Then the company Oculus VR demonstrated its first prototype of the Rift at the E3 conference in June 2012. In 2013, Oculus raised $2.4M, to finish developing its headset, through a crowdfunding campaign. Finally, having proven its potential, it was acquired by Facebook in 2014 for $2bn. Under Facebook’s umbrella, Oculus should not have any more funding struggles going forward. In the meantime, however, HTC and PlayStation have emerged as competitors. HTC will actually beat Oculus at releasing the first ever VR headset and the release of the Rift has a good chance of coinciding with the release of Morpheus. Whether Facebook, HTC or PlayStation—or, coming from behind, Microsoft—emerges as the dominant force in VR, the technology is going to shake things up and consumers will reap the rewards.

In VR, the name of the game is “immersion.” In order for VR to become a truly new and unique technology, it must replace the user’s feeling of “watching” a movie, for example, with the feeling of “being in” the movie. Modern VR headsets are supposed to provide an all-angles visual experience, meaning that when the user turns her head around, she doesn’t see behind her, or just blackness, but—in the example of the movie—would see the logical view of what was being seen in front. Whether VR can deliver on this promise is yet to be seen.

Quoted by the BBC, Director of Games for IHS Technology, Piers Harding-Rolls said: “We’ve got these higher-end devices coming to market, but what we haven’t seen yet is fully-realized content…We’ve seen technical demos or the occasional short level. But the E3 video games expo will be an opportunity for all the stakeholders involved to show off content.”

E3 will take place in Los Angeles in June.