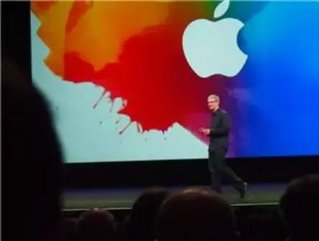 This morning, Apple CEO Tim Cook took to the stage at the Yerba Buena Center for the Arts in San Francisco to host the company’s first major product launch since Steve Jobs’ passing.

Before he showed off the new iPad (which is, indeed, just called iPad instead of iPad 3 as anticipated), Cook made some more general Apple announcements:

Naturally, Cook saved the product we’ve all been anxious to hear about for last.

Here are the key details for the new iPad:

The new iPad has an A5X chip with quad core graphics capacity, over a million more pixels than an HDTV, Retina display, an iSight camera (a 5MP camera on the back of the device), the same optics sensor that’s on the iPhone 4S, 1080P video recording and 4G LTE connectivity.

If last quarter’s sales are any indication, the latest iPad will be yet another successful Apple offering. During the event, Cook said Apple sold almost 15.5 iPads last quarter, which equates to more than any PC manufacturer sold in their entire line.

Just before leaving the stage, Cook left his audience with a vigorous message: “We are just getting started.”