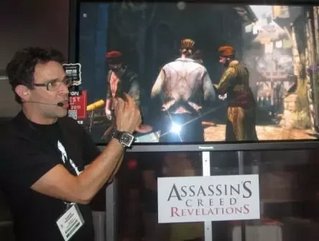 As mentioned before, Assassin’s Creed: Revelations by Ubisoft Montreal is set to be released this November. Business Review Canada got an up close and personal look of the new game at this year’s E3.

The fourth installment of the critically acclaimed Assassin’s Creed entertainment franchise brings players through new adventures. Following Ezio Auditore on his journey to recover five ancient seals that holds the keys to the future of the Assassins' brotherhood, the game is a combination of beautiful graphics and fabulous game play.

Gamers can utilize new attributes, such as the hook blade, to kill, climb and zipline through the level. Part of the demo shown at E3 showed how Ezio, trying to get his ship out of Constantinople, can use the new bomb crafting feature to blow up obstacles in its path.

Releasing on November 15th, Assassin’s Creed Revelations will be available on the Xbox 360, the PlayStation 3 and Windows PC.

The Assassin’s Creed franchise was originally released by Ubisoft Montreal in 2007. The first three games in the series have sold more than 28 million units worldwide and is now established as one of the best-selling series on next generation consoles. Assassin’s Creed is recognized for having some of the richest, most engrossing storytelling and is Ubisoft Montreal’s best known video game. The franchise is expected to branch out of the video game format into other entertainment including Facebook games, novels, short films and more.