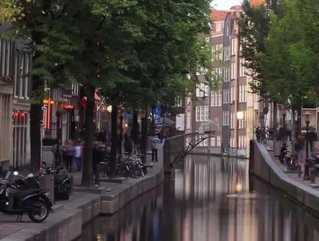 3D printing is a rapidly growing field, and pioneers are finding new applications all the time—from fun unique action figures to life-changing artificial limbs, the list goes on and on.

California-based software giant Autodesk—best known as creator of design staple program AutoCAD—and Amsterdam-based 3D printing R&D startup MX3D are two businesses with a keen interest in pushing the boundaries of 3D printing in architecture and engineering.  This year the two have joined forces (with additional support from construction firm Heijmans, Amsterdam City Council, and several other parties)to test those boundaries and show just what 3D printing is capable of, by designing and building an aesthetically striking and fully functional 3D printed steel bridge.

According to reports, MX3D is using Autodesk software to design the metal bridge that will then be built over an Amsterdam bridge using innovative MX3D robotics to draw and weld each component of the bridge onsite from molten steel in mid-air. “What distinguishes our technology from traditional 3D printing methods is that we work according to the ‘Printing Outside the box’ principle,” said Tim Geurtjens, CTO at MX3D, explaining the project. “By printing with 6-axis industrial robots, we are no longer limited to a square box in which everything happens. Printing a functional, life-size bridge is of course the ideal way to showcase the endless possibilities of this technique.”

A video recently released by MX3D outlines the startup’s journey in constructing this bridge, using robots developed by MX3D. After “endless testing,” initial mistakes and much trial and error while developing this technology, the company has been increasing its skill and knowledge of producing intricate and sturdy 3D sculptures. “Now we are ready for the ultimate poster project to test all facets of this highly promising printing technology: a large scale object that is functional and meaningful,” states the video.

Of course there are inherent risks with a project like this. The art and the science behind 3D printing is still developing—this project is a part of that process—and there is the potential for technical difficulties to arise over the course of building the bridge. While the primary goal of a 3D sculpture is aesthetic success, the construction of a bridge raises the stakes even further by demanding that the finished product be functionally successful in supporting the weight of foot traffic without bowing or breaking.

But with great risks come the possibility of great rewards. While 3D printing has been proving its applications, it still has an air of novelty about it. A fully functional, well-engineered and stable large-scale production like a bridge could help to build an increasingly important role for 3D printing in the construction world as a useful and versatile tool.

“I strongly believe in the future of digital production and local production, in ‘the new craft,’” added designer Joris Laarman in MX3D’s page dedicated to the project. “This bridge will show how 3D printing finally enters the world of large-scale, functional objects and sustainable materials while allowing unprecedented freedom of form. The symbolism of the bridge is a beautiful metaphor to connect the technology of the future with the old city, in a way that brings out the best of both worlds.”