Can Apple TV stand up to the competition? 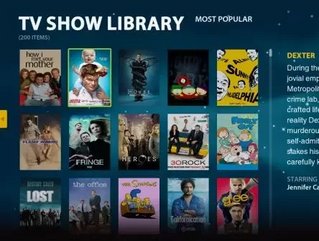 Apple announced its latest generation of the Apple TV last month with a selling point as “the simplest way to watch your favorite HD movies and TV shows on your HD TV.” The device is selling for $99 and users can fish through a massive online selection of first-run movies, HD movies and HD TV show episodes to rent from major networks for a rather small price.

Apple TV also has the ability to stream content from Netflix accounts, YouTube, MobileMe and Flickr, along with a personal collection of videos and images from one’s own library. The device has built-in HDMI, Wi-Fi and Ethernet cable for greater ease of use.

WHAT’S DIFFERENT?
The biggest change with the latest Apple TV is the ability to buy and store media. Although a significant change, some critics haven’t been too impressed with the device’s capabilities. Despite the larger processor, the user interface (UI) looks and acts virtually the same as the previous generation. The new, black, matte design is a little more aesthetically pleasing, but considering the device will be placed under the TV, its sleek appearance may go unnoticed.

According to an article on Gizmodo, “A $99 Netflix box with iTunes rentals is definitely a sweet setup, and unlike its predecessor, might actually attract attention. But other than more content and less cost, which by all means could have been accomplished with the old hardware, this isn't anything close to revolutionary. Think of it as the well-designed movie box the original Apple TV should (and could) have been.”

Apple TV maximum HD resolution is 720p, and since many home theater enthusiasts can’t live without their plasma screen 1080p HD resolution, it’s hard to tell if the HD selling point is worth the hullabaloo.

HULU, YOUTUBE, PODCASTS, OH, MY
With Apple TV’s Wi-Fi and Netflix linking capabilities, wouldn’t it make sense that many users would ditch their expensive and standard TV cable package to stream everything via the new device? Several bloggers and consumers like the idea of watching the newest movies via their Netflix account and if Wi-Fi capabilities were successful, couldn’t users stream their favorite shows via Youtube, Hulu, or other websites offering full TV episodes?

Writers all over the blogosphere are asking Steve Jobs to incorporate Hulu into the UI so that they can watch current TV series and episodes as they want. However, many tech-savvy fans already stream TV shows and podcasts through their PS3 and the PlayStation Network, which offers gaming with the rental or purchase of movies and TV shows. Xbox LIVE also has similar offerings in movies, gaming and social media.

ROKU VS. BOXEE
Roku and Boxee are similar devices already offering many of the new Apple TV’s capabilities. Roku is a little black box that allows users to instantly stream their favorite forms of entertainment on their TV. Netflix offers its movies and TV show episodes; users can listen to their custom-build radio stations on Pandora or access their own music library; or take advantage of Amazon Video on Demand. Roku connects directly to a broadband wireless Internet connection so no computer device is necessary, and the device starts at $59.99.

Additionally, Boxee brings together movies, TV shows, music and photos from the Internet and personal hard drive. The extensive app store also lets users view information from their favorite websites, such as Digg, Associated Press, CNN.com, Youtube, and others. Like other social media platforms, Boxee also allows its users to share information with friends in regards to the media they’re watching and/or listening to. The software can be downloaded for free to a computer and can be connected to your TV with an HDMI or DVI cord.

GOOGLE TV: THE NEW KID ON THE BLOCK
Google TV combines TV, DVR recordings and the Internet. Some new TVs will come with Google TV pre-installed, or users can purchase a box for their current TV. The programs will offer the ability to search for specific channels and shows and recording capabilities for later viewing. A built-in web browser also allows users to view, record and save other programs found on the web, along with playing music and online games. By combining TV and the Internet on the same screen, users can watch their program and browse the web at the same time. Google TV will be available in the fall of 2010.