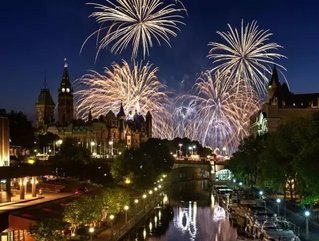 Fireworks sales in Canada are expected to increase by 30-40% this year, boosted by the $500 million in federal funding the industry received ahead of the country’s 150th birthday celebrations.

A series of firework displays on New Year’s Eve marked the beginning of the landmark year and on Canada Day (July 1), Parliament Hill in Ottawa will host a massive fireworks show, expected to be one of the biggest ever seen in the country, with plenty more expected across Canada.

Tom Jacobs owns Rocket Fireworks, a company which produces its own commercial pyrotechnic shows as well as operating 15 retail locations throughout Canada for customers to purchase their own fireworks, and he says he’s never known such a demand.

He told The Globe and Mail: “Everyone is booked solid. If you wanted to add a show for Canada you couldn’t find anyone. It’s jammed.

“I’ve heard companies are already planning events around shows and some have been shooting commercials already for Canada Day.

Mystical Distributing is one of the largest importer-distributors of fireworks in Canada, and are another company who have seen a dramatic increase in sales.

“We pre-ordered a lot of products. There have been factory closures in China by the government so there have been some issues with supply.”

No figures are yet available in terms of the overall value of the market, but last year 3.9 million kilograms of fireworks were imported into Canada and the figure is set to be significantly more this year.

Some experts in the industry are saying, though, that the prevalence of public displays during the Canada 150 celebrations will lead to a slight downturn in the commercial market for retail fireworks.