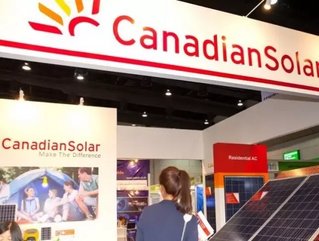 On Monday, Canadian Solar announced its closing of a sales agreement with EDF Renewable Energy to supply the company with 24.3 MWp (megawatt peak, or the greatest amount of energy potentially generated) of solar modules. The modules are specifically for the Catalina Solar 2 project, which is slated to begin in the first quarter of 2015.

Founded in 2001 in Ontario, Canadian Solar is one of the largest solar power companies in the world with more than 7 GW of modules installed in more than 70 countries. The San Diego, California-based EDF Renewable Energy is a subsidiary of French utility EDF.

For this order, Canadian Solar will deliver to EDF RE a total of 83,000 pieces of custom specific CS6X-P solar modules in a 7 x 12 cell matrix with dual UL and IEC 1000V certification.

“We are pleased to be selected to supply our PV modules to EDF Renewable Energy, a leading developer of renewable energy projects in North America,” Dr. Shawn Qu, Chairman and Chief Executive Officer of Canadian Solar, said. “We are looking forward to working with EDF RE in the future. I am confident that Canadian Solar's global leadership, proven track record, and well-known brand name will continue to make us a partner of choice in powering key solar installations worldwide.”

This news comes on the heels of the Conti Group’s purchasing of 10 MW worth of solar modules from Canadian Solar. For this 10 MW order, Canadian Solar delivered to the Conti Group in total 33,792 pieces of CS6X solar modules in 6 x 12 cell matrix with UL 1000V certificate. In the life span of 25 years, these modules will turn solar energy into 360,000 MWh of electricity, and displace CO2 emissions by 67,000 tons, the equivalent of taking 11,800 cars off of the roads, or developing a 6,200 hectare forest with 237,000 trees.

Canadian Solar has consistently been one of the top solar companies in the world and remains a renewable energy company to watch. At last check, Canadian Solar (NASDAQ: CSIQ) is up roughly 2 percent.