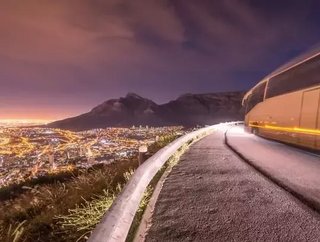 WhereIsMyTransport has announced that data for the entire public transport network of Cape Town is now available through its platform. Integrating data from both formal (i.e. officially provided) and informally-run (i.e. minibus taxis) transport for the South African city, this makes Cape Town the world’s first city to have both its formal and informally-run transport system data captured, integrated and openly available.

To celebrate this achievement, the company has created a map of the city’s most active informally-run taxi routes, visualising data from the transport information company’s open platform. Informally-run transport accounts for 80-90 percent of public transport journeys for passengers in medium-sized emerging cities. However, little documentation on these services exists, and where it does, data is incomplete or of low quality. Cape Town is now the only city in the world which has its entire transport system mapped, and where the data is integrated and accessible to anyone on the WhereIsMyTransport platform (an API).

This platform has been created to allow developers, transport operators and government officials to build solutions, such as journey planners, fare estimators, communications tools and connected digital signage, that improve access to public transport information for citizens in emerging cities, as well as to provide insight and analytics to aid city planning.

WhereIsMyTransport’s 13 local data collectors spent under 3 weeks recording taxi journeys in Cape Town, mapping 657 unique routes, covering 8,870 kms, and capturing 1,482 of the most commonly used stops, with an average journey cost of R10.86 ($0.80). These data points have been added to the WhereIsMyTransport platform alongside data for the city’s formal transport network to provide a complete picture of all of the transport options available to residents of the city.

Devin De Vries, co-founder of WhereIsMyTransport, commented: “Fully mapping Cape Town is a phenomenal achievement for our team. We’ve demonstrated that complex transport systems can be mapped at a much lower cost than many cities believe. With our efficient technology and methodology, even large cities don’t need to spend millions to map their networks. We have already mapped two more cities and will be releasing data for South Africa’s major metros this year. And that’s just the beginning: we’re excited by the potential for cities across Africa.”

Cape Town is the first fully-mapped city in the platform, and will be followed by East London, South Africa and Gaborone, Botswana in March 2017. WhereIsMyTransport will continue collecting taxi network data in South Africa’s major cities including Port Elizabeth, Durban, Johannesburg, Tshwane, Ekurhuleni, and Bloemfontein, all due to be complete by mid-2017. The company is in discussion with cities and local partners with the intention of fully mapping 20 African cities by the end of 2018. It already holds data on informally-run networks in Accra, Ghana, and Nairobi, Kenya.

While the company currently works with its own team to collect data, it has also created a ‘toolkit’ to enable any individual, organisation, or city to map their transport network. The toolkit includes a purpose-built app, methodology and planning techniques for tackling even the most sprawling cities, and support from the WhereIsMyTransport team to make data available through the platform.

Graeme Leighton, data collection co-ordinator for WhereIsMyTransport, commented: “We believe that the information challenge in South African cities undermines our infrastructure. We want to make the systems that exist more accessible for everyone. In Cape Town, every assumption we had about the network was challenged. We discovered dozens of previously unknown routes, and found many documented routes no longer operated.”

Leighton continued: “We invite others to put their own cities on the map and make their systems more accessible. Our tools are available to anyone interested in contributing to our platform, the world’s first open platform for public transport data in emerging cities.”

The first solutions built on the Cape Town data set will be created at a Hackathon hosted by WhereIsMyTransport in Cape Town from March 3rd-5th. Developers, designers, and people of all disciplines are invited to attend and work together on solutions. The event is sponsored by Microsoft and the City of Cape Town’s Transport and Urban Development Authority (TDA) and is part of the International Association for Public Transport’s Global Transport Hackathon series.

Developers can sign-up and access documentation and tutorials on the WhereIsMyTransport Developer Portal. The portal contains the latest information on which services and cities are currently in the platform.