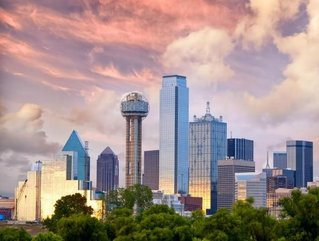 A bustling metropolis in north Texas with over 1.3mn inhabitants, Dallas is the third-largest city in the state. The city has a rich and vibrant history: the original home of the global convenience store chain 7-Eleven, an airport larger than the island of Manhattan, and iconic football team the Dallas Cowboys (the team that popularized the modern conception of the cheerleader). Originally an agricultural and American Indian trading hub, Dallas soon evolved into one of the world’s largest inland cotton trading cities in the early 20th century. In subsequent decades, the discovery of crude oil reserves in the surrounding area turned it into a budding boom town and quickly the center of the nation’s oil market.

Manufacturing infrastructure tied to the production of cotton-picking equipment and oil drilling led to the city emerging from World War Two as a leading communications, engineering and production town. The communications revolution, and more recently Industry 4.0, has continued to play a large part in Dallas’ economy to this day. Fortune 500 companies Texas Instruments, AT&T, Exxon Mobil and Jacobs Engineering are among the many technology and industrial leaders that call the city and its surrounding area home.

Continuing the successful tradition of communications, technology and industrial commerce, while also acting for the benefit of its citizens, is Dallas’ vibrant startup scene. We examine three socially conscious Dallas tech companies harnessing the power of the digital age to improve the lives of American citizens.

Founded in 2016 by Chris Brickler and Shawn Wiora, MyndVR is headquartered at the northernmost end of Dallas. Brickler, who served as an executive with Verizon, British Telecom and AT&T over the course of his career, has worked alongside Wiora to create a virtual reality (VR) application targeted at the assisted living demographic.

According to an article by D Magazine, the MyndVR uses 360-degree cameras to capture and bring to life comforting and engaging experiences for assisted living seniors. “We’re teleporting them from their four walls of existence into an unbelievable, fantastic environment,” Brickler told D Magazine. “They get to hear and see it, so they resonate with it in a way that’s so powerful and heartwarming.” One of the company’s VR experiences involved using a live band and actors in 1950’s costume to simulate a Frank Sinatra concert.

Brickler believes that the Dallas startup’s solution can and should be easily applied across the country, and has the power to effect positive change in the lives of people suffering from Alzheimers, Dementia or simply the isolation of old age.

The other main element of RoboKind’s product offering helps to address the future STEM leaders growing up in the city. “Dallas’ workforce of the near future demands different skills than its workforce has today. STEM skills, such as coding and programming, will become more important as the tech industry continues to grow,” writes Jeff Goodman, RoboKind’s manager of sales and operations.

Continuing to pursue its mission to provide inclusive and effective education, the RoboKind team created Robots4STEM, a simple drag and drop programming language designed to give children an early introduction to computer science. Children use the language to enter commands into Jett, a humanoid robot.

Situated on the southwestern side of Dallas, Track15 is a startup looking to change the way people change the world. Co-founded in 2017 by Andrew Snow and Chris Schultz, the company provides back end business development consultancy services to nonprofit organizations. “The lack of business acumen that nonprofits have—that’s what brought us together,” Snow said in an interview with D Magazine. “We believe the relationship between the donor and the mission are what’s important for a sustainable nonprofit model.”

Through close collaborative partnerships and consulting services, Track15 helps its clients streamline their organizations and create more value for the people they work to help. “We take them from zero to 60 very quickly,” added Snow.

Track15 currently counts nonprofits like Mercury One, the Farm to Consumer Legal Defense Fund, the Prison Entrepreneurship Program and the Dallas Film Festival among its clients. The company’s roadmap sees it seeking out larger clients and expanding beyond the Dallas city limits, driven by the idea that: “We want to listen to your story, bond to your uniqueness and commit to providing you with exactly what you need.”