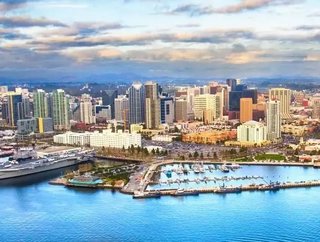 Attracting over 35mn visitors each year, San Diego’s stunning landscapes, commitment to tourism and world-class business opportunities have seen the city thrive. In this month's Business Chief, we take a closer look...

Located south of Los Angeles, San Diego has become a hotspot for corporate and leisure travellers. With ‘something for everyone’, the combined beach and city destination has become home to over a million US citizens, making it the second largest city in California.

Second only to its flourishing research, innovation and technology sectors, tourism is a dominant force, fully bolstering San Diego’s economy. Employing over 190,000 citizens, visitors have been found to spend close to US$11bn annually, with up to 70% spent at local businesses rather than accommodation.

Renowned as the birthplace of California, San Diego’s exceptional weather conditions and vast coastline which is often present on the US’ ‘Best Beaches’ lists have all fed into its nickname as ‘America’s Finest City’. Whilst a number of bars, restaurants and surf shops line its coastal spots, the city is also home to a number of preserved natural wonders, such as Switzer Canyon, Torrey Pines State Reserve and Marian Bear Memorial Park.

Popular with both locals and visitors to the city, Old Town San Diego State Historic Park is an area of regular tourist exploration, whereas iconic establishment, Balboa Park has earned the title of the largest park in San Diego. Spanning over a thousand acres, the area is home to several tourist attractions, such as San Diego Zoo, as well as over 15 museums. Balboa Park Gardens also provides a welcome space for visitors to relax and unwind. Reflecting its laidback vibe, over 300 parks and recreation spaces are situated across the city.

The top five blockchain startups set to disrupt the US economy

Situated within an hour from Los Angeles, San Diego is a top destination for US and Canadian travellers. San Diego International Airport has witnessed a significant increase in construction projects to counteract the exponential rise in tourism figures, which reached up to 22mn in 2017.

Total employment figures at the airport have also risen by over 30% in the last five years, providing 118,000 residents with employment opportunities.

Whilst exploring the city is still popular, ferries have grown in demand as tourists become more interested in exploring areas off the beaten track. A high number of car rental companies are also on offer to support this growing market. For those travelling across the city on public transport, San Diego’s Metropolitan Transit System (MTS) provides essential travel routes to most city and urban locations. The city’s light rail system and municipal trolleys also connect its downtown area to urban districts as well as educational and tourist spots.

Most importantly, The Port of San Diego remains central to the city’s flourishing economy and international trade. Providing over 40,000 jobs, ranging from shipbuilding to tourism, up to 800 businesses are situated at the Port's iconic waterfront.

From picturesque 19th century buildings to modern architectural delights, San Diego’s blend of old and new is clear to see throughout its central Downtown area. Neighbourhood district Gaslamp Quarter continues to inspire all those who visit, where restored buildings are complemented by 19th century street lamps lining the streets, and has become home to some of the city’s most acclaimed restaurants, bars and theatres.

Nearby, the city’s multicultural flair is showcased in the local neighbourhood, Little Italy. Close to the harbor and influenced by San Diego’s earlier fishing industry and marine heritage, Italian families settled in the city in the 1900s and have become a key part of the city’s dynamic culture. The area is also renowned as a thriving café and restaurant spot, popular with food lovers and aspiring artists. A multitude of pubs and bars are also on offer, as well as a number of craft breweries, which continue to grow in popularity.

Not content with increasing numbers visiting its tourist attractions, San Diego has also transformed into a hotbed of innovation for businesses. Its international reputation is not to be underestimated, where the University of San Diego, San Diego State University and the University of Southern California (USC) have all grown in status and demand. USC has also become one of the city’s largest employers.

Located close to Gaslamp Quarter and situated 10 minutes from San Diego Airport, non-profit corporation The San Diego Convention Center has become a key lynchpin, contributing over $22bn in regional impact since its inception in 1989.

Receiving the largest loan approved by the California Infrastructure and Economic Development Bank totalling $25.5mn, the center held 149 events in 2017, where up to 898,913 visitors were in attendance, creating a regional impact of $1.1bn. Conventions continue to bolster the city’s economy, where San Diego’s Comic-Con event, for example, created the most financial impact for a singular occasion in 2017. Making a regional impact totalling $143.1mn, hotel and sales tax revenue also reached a staggering $3.14mn, which goes into the city’s general fund.

Supporting the city’s booming medical and biotechnology sector, over 100 events have been planned at the center this year, with medical meetings forecasted to account for 46% of its estimated $1.2bn regional impact this year. Over 300 biotechnology companies and close to 100 contract research organizations (CROs) which support the pharmaceutical sector reside in the city, with a number of pharmaceutical businesses and healthcare start-ups placing firm roots in the city.

Additionally, technology companies have become enticed by the advantages San Diego can offer. Electronics giants, Nokia, LG Electronics and wireless cellular technology business Qualcomm have all based themselves in the city; however, entrepreneurs have also been catered for.

Frequently ranked as one of the best cities in the US, San Diego’s mix of beach and city locations, historical significance, world-class dining, educational and sporting facilities make it one of the most popular destinations, and will see it remain a key player within the tourist and corporate traveller market in the coming years.