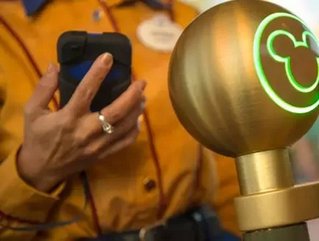 Walt Disney World Resort recently announced the introduction of their new collection of tools called MyMagic+. Pairing a wristband with the new My Disney Experience website and mobile app, guests will be able to better plan their trip to the park if they want to.

The mobile app shares attraction wait times, allowing guests to even reserve times for their favorite attractions. Other tools allow guests to make reservations for dining and shows, such as the enhanced FastPass system called FastPass+.

Everything is linked together through Disney’s Magic Band, a RFID wristband that will serve as a room key, theme park ticket, FastPass+ access, PhotoPass card and can link to a guest’s credit card to make purchasing easier. MyMagic+ has already been tested in Walt Disney World and Disney stated in their official Disney blog that feedback has been “fantastic.”

With this announcement, many speculate that Disney will be tracking a guest’s every move at their stay at the park, including which attraction they choose, how much money they spend, what exact products they purchase and more which has led some to visualize the technology as “big-brother”-esque.

With the introduction of ways to reserve for attractions more than 60 days in advance, many guests may be able to take advantage of the new technology and skip out on long and tedious lines. Only time will tell if the opt-in wristbands will be adopted by Disney guest masses, but it will be interesting to see how the MyMagic+ system develops.

“This collection of tools is another step forward in the ongoing evolution of our guest experience, giving us even more ways to help friends and family create the unforgettable Disney memories that they want most. We’ll be testing, adjusting and adding features to MyMagic+ and My Disney Experience over time and will continue to make improvements based on our guests’ feedback. We look forward to sharing more with you in the months ahead,” said Disney in its official Disney Parks Blog.