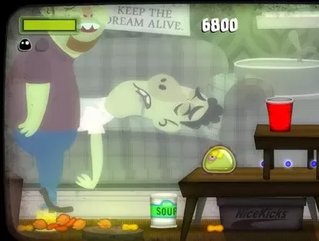 Available for purchase on February 21st in the PlayStation store, Tales from Space: Mutant Blobs Attack is a side-scrolling puzzle game that follows the adventures of a mutant blob that escapes from a lab. Set out to destroy and consume everything in its path, players take the blob through fun levels, such as a frat house, enlarging the blob to an ill-proportionate size.  The game is fun to play, even for people like me – beginner players, and incorporates PS Vita controls for a different playing experience. Players should look out for fun Easter eggs in the background detail of the game such as references to other indie games or Internet memes.

DrinkBox Studios was excited about the challenge of creating a game on the PS Vita platform, in comparison to PS3. “When Sony gave us the opportunity to let us work on the platform (PS Vita) we sort of set out to do stuff we could do with it that we wouldn’t be able do on the PS3. Just to experiment, have fun and do something different,” said Ryan MacLean, CEO of Drinkbox Studios to Business Review Canada.

This title’s creation came as a direct result from government funding, such grants from Ontario Media Development Corporation (OMDC) or tax credits from Scientific Research and Experimental Development (SR&ED).

Mutant Blobs Attackwill be available for the low price of $7.99, as is DrinkBox Studio’s previous title About a Blob, and the company is offering gamers a bundle package of both games for $9.99.