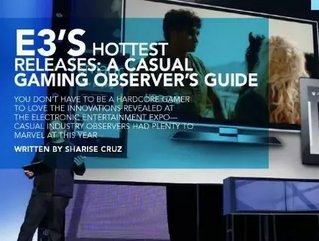 Click here to read this article on our interactive reader in the July issue of Business Review USA!

The Electronic Entertainment Expo (E3) has been providing the computer and video gaming industry and its rabid fans with an arena for salivating over upcoming innovations since 1995. Although some of those who work and play outside of the industry may not be plugged into all of its developments, E3 is largely considered to be gaming’s ultimate expo.

As such, it is routinely the perfect place to see what’s happening in one of the country’s most rapidly evolving industries. (In our April feature on the top growth industries of 2012, we pointed out that the PC Gaming Alliance anticipates gaming to continue its rise in the US to reach about $25 billion by 2015).

So we headed to Los Angeles early last month to see for ourselves what the industry has in store this year in terms of technology, innovation and trends, from a casual industry observer’s perspective.

To be honest, this year’s E3 wasn’t the overall bonanza it has been in years past. For their part, Microsoft and Sony refused to showcase the next generation versions of their consoles. Nintendo has been teasing its big update, the Wii U, since E3 2010 and actually showcased a prototype version last year, so this year’s presentation of the console wasn’t exactly jaw-dropping. But even considering those slightly deflated circumstances, there was still plenty happening inside the Los Angeles Convention Center this year to keep the crowd of 45,700 wide-eyed and happy.

Predictable as it was, Nintendo provided the biggest buzz of this year’s show with its presentation of the Wii U, slated for release this holiday season. Since its prototype appearance at last year’s E3, serious gamers have voiced their displeasure with Nintendo’s latest offering, but for the casual gamer, the Wii U is both unique and entertaining. It’s been described as the “Swiss Army knife” of video games, due to its ability to operate as a home entertainment hub as well as a platform for connecting with other players through social media.

Moreover, its wireless, motion-sensitive tablet controller and high-definition console system coupled with its delivery of HD video via YouTube, Netflix, Hulu Plus and Amazon Video make it a valuable home entertainment portal.

More than 20 games are currently in development for the Wii U, but gaming is not Nintendo’s sole focus with the console.

“For 30 years, game machines couldn’t take on a more important role than the TV itself,” said Shigeru Miyamoto, one of the creators of Nintendo’s wildly popular Mario games, before explaining that the company wants the Wii U GamePad, or controller, to be the first screen people interact with in their living rooms.

Although Microsoft didn’t want to show off a new Xbox, it did announce that it will be rolling out SmartGlass—an app that enhances Windows 8 devices, Windows Phones and iOS and Android smartphones. SmartGlass connects mobile devices to a user’s Xbox 360 console, even when they’re not at home.

Intended as an “extension” of the Xbox 360, SmartGlass is a free and revolutionary way to give consumers more control of their entertainment experiences. Videos can easily be transferred from one device to another and devices can be used to control the console, even during game play—a particularly attractive feature for touchscreen tablet owners.

“If you love to play games, watch TV and movies, surf the Web or listen to music, there has never been a better time to be on Xbox,” said Don Mattrick, President of Microsoft’s Interactive Entertainment unit.

The Xbox 360 is also getting a boost when Halo 4 is released this November. Microsoft used E3 as an opportunity to preview Halo 4, which is the eighth installment in the multi-million dollar franchise. All previous Halo games were developed by independent studio Bungie, Inc., but that partnership has dissolved. Now, Halo 4 is Microsoft’s opportunity to continue the legacy of a beloved game with its own 343 Industries studio and the software giant has used considerable resources to help make that happen.

The brand that brought us the PlayStation 3 made its presence known with games rather than devices. Beyond: Two Souls, expected to be released next year, garnered a lot of attention for Sony, although it was only published by Sony’s Computer Entertainment unit and developed by Quantic Dream for the PlayStation 3 platform. The game’s main character, Jodie Holmes, is portrayed by Canadian actress Ellen Page through motion capture technology and takes a cinematic approach to gaming, focusing on Page’s performance and a character-driven narrative.

On the other hand, PlanetSide 2 was both developed and published by Sony Online Entertainment. It was officially announced a year ago at the Sony Fan Fair, but this year, it was an E3 superstar, pulling in Best PC Game awards from Ten Ton Hammer and GameSpy, a Best of Show award from Game Informer and a slew of other top nominations and distinctions. This free-to-play, massively multiplayer online (MMO) game hasn’t even entered a beta stage yet, but even in its raw alpha state, its attention to detail, scope and scale and non-invasive microtransaction model (a feature that allows players to customize characters, weapons and vehicles),  makes it an incomparable industry development.

Because gaming isn’t all about visual stimulation, brands like Turtle Beach specialize in providing the gaming industry with audio peripherals designed to “give gamers a more immersive and private game audio.” This year was Turtle Beach’s biggest E3 showing, during which it unveiled its fall line in a 6,000 square-foot booth complete with an immersive theatre to truly demonstrate the powerful relationship between sound and gaming.

Outside of the brand’s own space, Turtle Beach headsets were hooked up for gameplay at a variety of E3 booths, including Activision, Warner Brothers, Konami and Bethesda.

Additionally, Turtle Beach announced partnerships with Major League Gaming, Activision and Nintendo which will allow it to create limited edition and licensed gaming headsets for the Wii U and Microsoft’s Call of Duty: Black Ops II.

In the same vein of PS3’s Beyond: Two Souls, LucasArts has developed a video game with cinematic appeal. Instead of just enlisting programmers with gaming on the brain, LucasArts created Star Wars 1313 with a team of animators and motion-capture specialists from several film divisions, including Industrial Light and Magic.

The details and movement captured in this game are phenomenal and were a major talking point of this year’s show. Oh, and you definitely don’t need to be a gaming fanatic to appreciate them.