ePawn Arena takes board games to the next level at E3 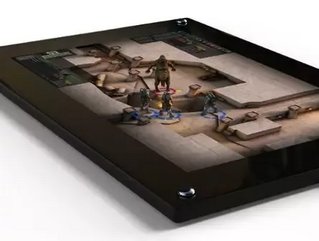 It seems as if smartphones just keep getting smarter. ePawn has worked with studios and developers to create real-world objects integrated into video games to create a new gaming experience. Imagine using real playing pieces (think chess pieces, army men, and air hockey pieces) to become part of a virtual gameboard. The French developers are showing off ePawn at E3 today to bring the touch of real playing pieces into video games.

With virtually no limit on the size of the detection surface, ePawn’s innovation allows up to six players to gather around the “arena” on its large screen, along with up to 100 objects that can be tracked simultaneously. And this game board is seriously smart. When you’re playing chess, ePawn can identify pawns and figures. For instance, the black queen is recognized from a white castle when playing with real chess pieces. To make the Arena even more exciting – an object’s height can also be displayed on the board, as well as its orientation. Genius.

The ePawn Arena can be connected to any computing device, like a smartphone, tablet, PC, or laptop, to play new and existing games in a new way. The arena is slated to arrive on the market by early 2012. The ePawn Arena is reinventing board games and video games. And we just can’t wait to get our hands on it after E3.