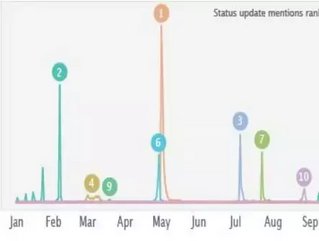 December is the unofficial month of lists. Over the next few weeks, we can expect to see lists chronicling the best and worst of everything that emerged this past year, from gadgets to baby names to news events and everything in-between.

Facebook, the world's largest social network, doesn't want to miss out on the fun that comes with reflecting and it's released a list of the top status update topics from 2011.

Facebook status updates have become a top way to discuss and share current events and news for many people and, as such, its 800 million plus users have provided an interesting snapshot of what people were really talking about all year.

The site’s data team combed through users' status updates, compared them with last year’s, and discovered the most discussed topics and trends, also known as memes.

What Facebook unearthed is essentially what people have been talking about around the water cooler, at the grocery store and on the web; they’re the cultural trends and events that shape our global discussions.

Facebook also provided a list of the top ten news stories shared by users of the site, as follows:

1. Satellite Photos of Japan, Before and After the Quake and Tsunami (New York Times)
2. What teachers really want to tell parents (CNN)
3. No, your zodiac sign hasn't changed (CNN)
4. Parents, don't dress your girls like tramps (CNN)
5. Father Daughter Dance Medley (Yahoo)
6. At funeral, dog mourns the death of Navy SEAL killed in Afghanistan (Yahoo)
7. You'll freak when you see the new Facebook (CNN)
8. Dog in Japan stays by the side of ailing friend in the rubble(Yahoo)
9. Giant crocodile captured alive in Philippines (Yahoo)
10. New Zodiac Sign Dates: Ophiuchus The 13th Sign? (The Huffington Post)