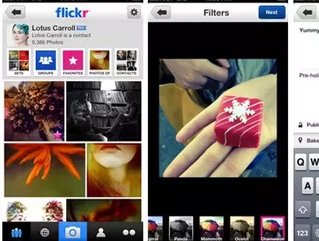 Flickr announced today an update to their iPhone and iPad app with new features that allow users to edit their photos on the go, apply filters and share easily on their social media channels as well as connect and comment with other Flickr users.

Speculated to be changed in an effort to compete with photo app leader Instagram, Flickr’s new features offer iPhone users a better experience. First, Flickr has built in an editor to the app, allowing users to correct, crop, or enhance with a choice of retro-filters.

“We know that some of you love details, so we didn’t overlook them. You can always see where and how a photo was taken, which sets and groups it belongs to, and who is tagged,” said Flickr in an official blog post.

Flickr is also promoting the perusal of other users' photos by adding a Contacts view. Users can scroll through friends or favorite photographers as well as Flickr groups and keep up to date with recent uploads.

Finally, Flickr has introduced an Explore tab which will feature the most interesting photos uploaded daily.

The app sounds pretty familiar to Flickr’s competitor Instagram. In the end, Flickr has recognized the popularity of important features and incorporated them into their own community, a benefit to its users in general.