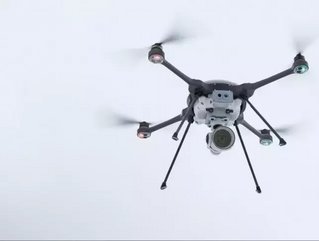 “The acquisition of Aeryon Labs reinforces our long-term strategy to move beyond providing sensors to the development of complete solutions that save lives and livelihoods,” said Jim Cannon, President and CEO of FLIR Systems in a press release.

“This acquisition, coupled with our acquisition of Prox Dynamics in 2016, greatly increases our unmanned systems solutions capabilities, expanding beyond nano-UAS into Group 1 UAS solutions for military. We intend to continue to invest and build this area of our business and broaden our capabilities as we view unmanned and autonomous solutions to be a significant opportunity for organic growth in the coming years.”

Aeryon’s vertical takeoff and landing quad-copter airframes already use FLIR’s thermal imaging technology, among other sensor formats to provide immediate high-resolution intelligence, surveillance, and reconnaissance capability. The company’s flagship UAS is the SkyRanger, which is able to be transported and operated by a single user in inclement weather and at high altitude. The system is also designed with a modular and open architecture, allowing for further customization by users and third-party developers.

“We’re thrilled to join the FLIR family and to have a large, growth-oriented technology company as our new home,” said Dave Kroetsch, Co-founder and CTO of Aeryon Labs. “As drone technology and its markets evolve, customers are seeking UAS as just one component of a broader solution. While Aeryon has been evolving in that direction for the past few years, being part of FLIR Systems brings a path to include our hardware and software technologies in much bigger solutions than would have ever been possible on our own.”