Ford to expand and develop in the autonomous vehicle market 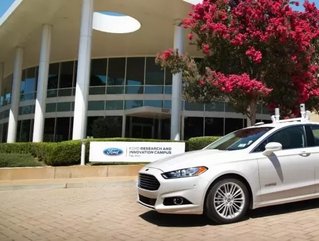 Ford has announced its plans to have a fully-autonomous SAE level 4-capable vehicle in commercial operation by 2021 in a ride-hailing or ride-sharing service.

Ford aims to become a leader in autonomous vehicles with its Ford Smart Mobility plan. It wishes to become well known for its connectivity, mobility, customer experience, and data and analytics.

Mark Fields, President and CEO of Ford, said: “The next decade will be defined by automation of the automobile, and we see autonomous vehicles as having as significant and impact on society as Ford’s moving assembly line did 100 years ago.

“We’re dedicated to putting on the road an autonomous vehicle that can improve safety and solve social and environmental challenges for millions of people – not just those who can afford luxury vehicles.”

Ford is adding two buildings and 150,000 square feet of work and lab space close to the current R&I center. This hugely expands the company’s local footprint and will allow the expansion of the Palo Alto team by the end of 2017.

Raj Nair, Executive VP, Global Product Development, and Chief Technical Officer of Ford, added: “For has been developing and testing autonomous vehicles for more than 10 years. We have a strategic advantage because of our ability to combine the software and sensing technology with the sophisticated engineering necessary to manufacture high-quality vehicles. That is what it takes to make autonomous vehicles a reality for millions of people around the world.”