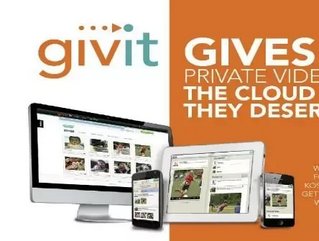 Anybody with a video camera and a YouTube account can take to the Internet and publicly broadcast an American Idol audition tape or clip of their dog jumping on a trampoline. But what about the rest of us; the rapidly growing population of professionals who want to share videos privately, either with loved ones or colleagues?

During SXSW Interactive, amidst the veritable avalanche of tech startup promotion, San Diego-based Givit grabbed our attention with its simplicity and built-in value to businesses.

We sat down in Austin with Givit Founder and CEO Greg Kostello, who gave us a close-up look at his creation. Kostello launched Givit in late 2011 after recognizing a need in the market.

In an age where the average professional has access to multiple forms of technology on the go, the ability to access files anywhere, at any time, is invaluable, but wasn’t possible in this capacity before Givit.

“The hardware got way ahead of the software, and people were looking for an evolution,” says Kostello. “Now we’re making software that matches our hardware’s abilities—and whatever you have on hand is perfect.”

Because Givit users can automatically back up video files created with any recording device on the cloud for later retrieval, the entire storing and sharing process becomes transparent. The Givit service can be fully accessed on smartphones and several other mobile devices and everything loads in the background of your system so your sending device never gets tied up.

Givit’s practical uses for professionals are as varied as they are all-encompassing.

Are you a managing executive that has to travel frequently?

You could create briefings videos at your convenience and share them through Givit with your team, keeping them up-to-date.

Need to create training or demonstration videos for your team that can be accessed easily, yet cannot be distributed to the public?

Videos shared with Givit can discreetly and smoothly show your staff things that couldn’t be described with ordinary words. Plus, your videos become truly private—they cannot be forwarded or shared further so they may only be viewed by the recipients chosen.

“What you put on Givit stays on Givit,” Kostello assures.

Have a bug with one of your systems and you want to quickly fill in your IT department without broadcasting your issues to the World Wide Web?

Send a video of the problem in question through Givit and your IT team can reply right away, either with text or another video. Problem solving couldn’t be any smoother; unless, of course it was face-to-face.

The fact is, when you can’t be there in person, video is the fastest, clearest and warmest way to communicate with the people you need to help you run your business.

“I could sometimes easily send an email, but there’s something about email that’s impersonal,” Kostello says.

With Givit, everyone with a smartphone, tablet or computer could use the almighty video to privately facilitate communication between departments.

During SXSW, Givit announced a partnership with Cisco that will prove to be invaluable to users of Cisco’s Flip Video cameras and FlipShare sharing software.

Last year, Cisco decided to exit the Flip video camera business. As a result of the transition, all FlipShare videos now have a 30 day expiration period and all FlipShare users must find another program to offload, organize and archive their videos by the end of 2013. That’s where Givit comes in.

With a Givit account and a few mouse clicks, FlipShare users can transfer their videos over to Givit for permanent storage and sharing capabilities.

For fans of the Flip camera, Cisco’s partnership with Givit is a perfect match—within a few days of the announcement, over 70 thousand videos were uploaded to Givit, making it the fastest growing video community on the Web.

For Kostello, it’s just another opportunity to present the public with value.

“I like creating products that people love to use,” Kostello says. “With Givit, we built the reward system right into the product.”