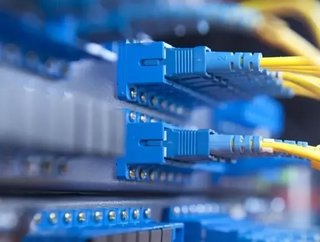 The New York Times (NYT) has reported that researchers at the University of California, San Diego have made a scientific advance that could double the amount of data sent by fiber optic cable, as well as sending it faster and at a lower cost.

One way to understand the challenge of sending data through fiber-optics is to imagine a person standing in front of a wall while pointing a lit flashlight at it. The circle of light on the wall would be bright, well-defined, and you’d be able to see details on the wall. As you moved back farther and farther while pointing the flashlight at the same spot on the wall, the circle of light would grow larger and less defined and the intensity of the light on the wall would degrade.

Designers of networks that carry data through fiber-optic circuits face a similar challenge. “Beams of laser light packed densely in fiber-optic glass wires need to be both amplified and recreated at regular intervals to send them thousands of miles,” writes the NYT. A significant part of the cost to build these networks is the process of converting optical lasers from light to electricity and then back again. “The process also limits how much data they can carry,” reads the NYT.

The proposed solution is to “predistort” the data transmitted via laser beams so it can be deciphered easily over great distances.

To achieve this, one creates guardrails for the light beams with something called a frequency comb. The result is that the information is encoded before it is transmitted.

[Related: How we consume the Internet on a global scale]

“That has the effect of embedding a digital watermark in the original data, making it possible to transmit data accurately over much longer distances and dispense with the need to perform optical-to-electronic conversions at relatively short intervals,” writes the NYT.

In the lab, the researchers conducted an experiment—not discussed in their scientific paper—where they sent a message 7,400 miles without having to regenerate the signal.

The research has been partly supported by Google and Sumitomo Electric Industries, a maker of fiber-optic cables.

[Related: The top 5 Internet trends SME can take advantage of]

A network like this would be significantly less expensive and could carry more data. So far, the researchers have been able to increase the power of the signal up to twenty times over a long distance. Until now, when network builders increased the signal power in an attempt to send data faster, the signal behaved like a man in quicksand. Under the old model, the more power you exert, the lesser results you get. This new model offers different outcomes.

Scientists are divided in their reaction to the advance. Critics of the paper, like Alan Huang, former researcher at Bell Labs, think there will be challenges applying this approach to the real world.

However, if these challenges are overcome, there may be a great investment opportunity in this science.