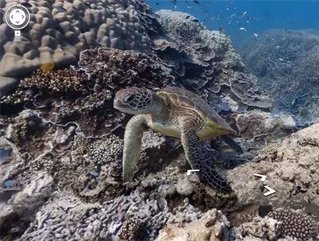 Google Maps announced today that its users will be able to see up close and personal underwater panoramic images in Australia, the Philippines and Hawaii through utilization of Street View. Done in an effort to provide “the most comprehensive, accurate and usable map of the world,” Google’s new photos of the world under the water will allow its users to explore six of the world’s living coral reefs.

“Now, anyone can become the next virtual Jacques Cousteau and dive with sea turtles, fish and manta rays in Australia, the Philippines and Hawaii,” said Brian McClendon, VP, Google Maps and Earth, on the Google Official Blog.

This new Street View opportunity will allow users to see stunning images such as a sea turtle swimming among a school of fish, the reef at sunset and visually follow a manta ray on its journey.  Other fantastic imagery includes ancient boulder coral at Apo Island in the Philippines, snorkelers in Oahu’s Hanauma Bay and coral reef in Mau’s Molokini crater.

“Whether you’re a marine biologist, an avid scuba diver or a landlocked landlubber, we encourage you to dive in and explore the ocean with Google Maps. Check out our complete underwater collection, featuring a Google+ underwater Hangout from the Great Barrier Reef,” said McClendon.