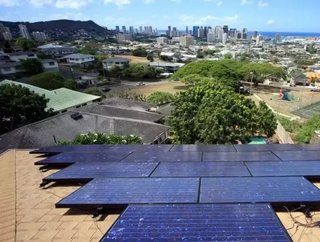 When it comes to the energy sector, every region in the United States has different capabilities and different needs. As a chain of islands, the state of Hawaii is different from most in this regard—whereas states in the Continental U.S. can rely on exporting neighbors for a stable energy supply, Hawaii must produce and supply its own. Now the state is making a change for the greener: at the Asia Pacific Resilience Innovation Summit this week, Hawaii Governor David Ige discussed his administration’s plan to curb its reliance on petroleum for energy production, instead guiding the state toward 100 percent renewable energy production by 2045.

As The Nation reports, Hawaii residents and businesses grapple with high in-state energy prices on a near constant basis—stemming from the unstable and often high price of oil. This situation makes the state a perfect place to try out a new approach to energy sourcing:

Residents pay the highest rates for electricity of any state in the union. Last year, before the recent oil price drop, residential electricity averaged around 36 cents per kilowatt hour (the US average is 12 cents/kwh). On the mainland, states that do not generate enough electricity themselves can import it from their neighbors. Islands in the middle of the Pacific just have what they can make themselves. Because Hawaii’s energy plants were built before it was economical to ship natural gas as LNG, they for the most part use petroleum. The high oil prices of the past decade are estimated to have cost Hawaii some $5 billion extra that was not anticipated.

But while it has become more economical to ship liquefied natural gas (LNG) in recent years, Hawaii is planning to skip LNG and pursue renewable energy sources instead. Ige explained this reasoning during his address, citing several points that make renewable energy a more desirable choice for the state:

﻿Ige said Monday that LNG (liquefied natural gas) will not save the state money over time, given the plummeting prices of renewables. Moreover, “it is a fossil fuel,” i.e., it emits dangerous greenhouse gases. He explained that local jurisdictions in Hawaii are putting up a fight against natural gas, making permitting difficult. Finally, any money put into retooling electric plants so as to run on gas, he said, is money that would better be invested in the transition to green energy.

There is fervent discussion in the United States over whether or not renewable energy is viable as a primary energy source, or merely as a supplemental source to add an extra boost to energy produced from conventional fossil fuels. But discussion can only go so far—only an attempted execution (whether successful or not) can truly prove whether renewable energy can sustain a state entirely. With the support of the U.S. military and the Hawaii Electric Company, Hawaii is moving full steam ahead toward the implementation of this endeavor. How that endeavor fares over the decades to come could have significant impact on the future of energy for the rest of the United States.