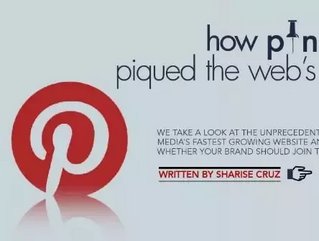 Click here to read this story in the April issue of Business Review USA!

If you’re tapped into the latest marketing trends (and if you’re reading our Social Media blog, we certainly hope you are) you’ve likely heard about Pinterest—the latest social sharing site to hold our browsers hostage.

The premise of Pinterest is amazingly simple: it operates as a pinboard-esque photo sharing social media site.

Users simply put a digital pin in media items (most often photos, but also videos, web discussions and other visual items) they find interesting. Those pins are grouped into “boards” on the user’s Pinterest profile, which can be accessed by the public, shared with specific fellow users as well as posted to connected Facebook or Twitter feeds.

Pinterest says its mission is to “connect everyone in the world through the ‘things’ they find interesting.” That’s the basis of the modern social media site, right?

So users don’t go to Pinterest for status updates, news, games or hashtag trends. Up until recently, they didn’t go there to connect with brands, either.

But during a six month period at the end of 2011 and beginning of 2012, Pinterest grew a remarkable 4,000 percent. It’s undoubtedly the Internet’s fastest growing social media site and its swift success has made it a trendy resource for individuals and brands alike.

It’s not exactly new-new, though. Pinterest has been around for two years. Like Google+ (which actually debuted six months later), when Pinterest first launched, it was an invitation-only beta site. Unlike Google+, Pinterest is stacking up highly active users who still must request an invite from the site or receive one from a friend. It’s like the ultra-chic club that started out kind of underground, but stayed hip even after everyone found out about it. People don’t even mind having to wait a bit to get in.

There are a slew of reasons why it has been successful, but what has been most valuable to businesses is the power it gives users to essentially build a wish list of e-commerce desirables and share it with their friends with a single click. Content is being shared across Pinterest at insanely rapid rates as you read this sentence.

Whole Foods, Martha Stewart, Real Simple, Etsy, Bergdorf Goodman, HGTV and the Perfect Palette wedding blog are rank among the site’s most followed brands. At the time this article was published, Etsy held the number two spot with more than 55,155 followers but was completely dwarfed by Perfect Palette, which boasts more than 240,000 followers.

(Considering Pinterest’s remarkable growth and trend shifts within the last few months alone, we expect these numbers and rankings to be shaken up at any moment.)

Now, you may have noticed that all the aforementioned brands have a couple of things in common: they primarily target women and they specialize in things that are visually appealing and covetable, yet attainable.

Pinterest has been called “fantasy football for girls”—a designation we might ordinarily think was sexist, but it turns out that 80 percent of the site’s users are actually female.

It won’t be beneficial for all brands to put significant time into Pinterest. A variety of factors need to be weighed when considering what your brand should do about it, including demographics, available content and your brand voice’s potential role in the conversation.

If, after looking at the available stats conveniently scattered throughout this article, you find that your business has an audience on Pinterest, by all means, get an invite, create a profile and get to pinning!