How will the first self-driving 18-wheeler change the trucking labor market? 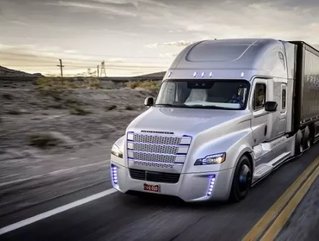 For nearly a century, the nation’s wares have been transported across thousands of miles of  highway by human beings, truckers, behind the wheel of 18-wheel vehicles. With the recent unveiling, by Daimler Demos, of the Freightliner Inspiration Truck (FIT), the first self-driving 18-wheeler, change is on the horizon. How will this development change the trucking labor force?

While the trucking industry goes on largely unperceived by the common American, its size and importance are formidable.

“In 2012, trucks transported about 70 percent of all freight tonnage in the country; globally, the industry is expected to triple by 2050. Autonomous trucks, Daimler said, could help ease into that growth without sacrificing economic and environmental needs,” writes PC Magazine.

While the idea of a self-driving truck would make one think that companies would no longer need truckers, this is untrue. The FIT has some limitations. For example, it cannot operate itself in heavy rain, snow or 30-40 MPH cross-winds. The job of the trucker will be modified and his wages may change, but he won’t be eliminated.

Speaking to the Washington Post, Richard Stocking, president of Swift Transportation, which operates 18,000 trucks, said, “This definitely could be a win-win for the driver and the company he works for, to be able to do other things when he is in that autonomous mode.”

According to the Washington Post, businesspersons like Stocking are already visualizing their drivers, “doing a potpourri of tasks, perhaps tracking deliveries and entering information relevant to [their] load with the help of an iPad or headset.”

Stocking also speculated that the typical trucker profile may change as well: “He [said] autonomous trucks may bring in new populations as drivers, such as college students looking to make money on a weekend. [He] also threw out the possibility of drivers seeing their wages increase as they take on additional duties, and are not just paid for the miles they cover,” reports the Washington Post.

Not all stakeholder reactions are characterized by unbridled enthusiasm. The American Trucking Associations (ATA), a leading advocate for the trucking industry, strongly supports technological development but also wants to invite the public into further dialogue concerning infrastructure, weather and how else the FIT will impact the labor force.

In a statement submitted by Sean McNally, Vice President of Public Affairs and Press Secretary for the ATA, the Associations say: “ATA supports the development of new technologies that can improve the safety and efficiency of our industry, so we will be watching the development of these autonomous vehicles very closely.  That said, there are real questions—ranging from cargo security to the impact of aging infrastructure and weather on their performance—about how these vehicles will fit into the trucking industry, and those don’t even touch the economic questions surrounding the effect automation will have on our industry’s labor force and the cost of these technologies.”

One thing is for sure. Things will never be the same in American trucking.

"The application of this innovative technology to one of America's most important industries will have a lasting impact on our state and help shape the new Nevada economy," said Nevada Governor Brian Sandoval, foreshadowing things to come for the rest of the country.