HTC Unveils Rezound - The 1st US Phone with Beats Audio 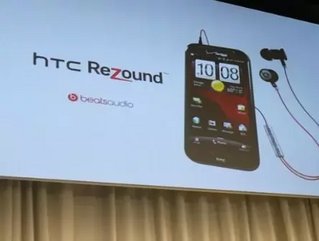 When was the last time you recreationally listened to music on an Android phone? We mean, really listened to it, reveling in your phone’s sound quality and clarity? Sure, you may plug a pair of headphones into your smartphone’s audio jack from time to time, but smartphones are not largely known for featuring sensational entertainment audio quality.

HTC is looking to change that landscape with Rezound—its gift to music-loving smartphone fans that delivers “thundering bass, soaring midrange and crisp highs.”

From the outside, the Rezound isn’t a huge departure from what’s already on the market, but it is the first HTC smartphone to feature an HD 720p display and has a 4.3-inch super-LCD screen.

Sure, HTC already has a bevy of sleek and attractive smartphones in its arsenal, but none of those other phones come with the instant street cred of Beats audio and no other phone on the market comes with a pair of Beats headphones.

Beats audio technology, developed by rapper Dr. Dre and Interscope Records Chairman Jimmy Iovine, aims give consumers access to advanced, studio quality sound and allow them to hear its details and dynamics as artists and producers do.

“HTC fully recognizes the destruction to audio caused by the digital revolution. It embraces our vision to repair this ecosystem and bring the feeling from the recording studio to the smartphone,” said Iovine in a press release about the Rezound. “This is only the beginning of our plan to fix how music is delivered.”

There has been a flurry of speculation and leaks surrounding the Rezound (previously codenamed Vigor) ahead of its release, but HTC announced that will be sold exclusively by Verizon starting November 14.

In all, this has been a fantastic week for Taiwan-based HTC Corp. Tuesday, California-based research firm Canalys declared that HTC is the largest smartphone vendor in the US. HTC earned 24 percent of the market in the third quarter, followed by Samsung’s 21 percent, Apple’s 20 percent and RIM’s 9 percent.