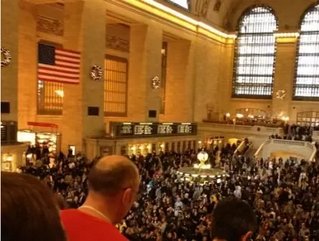 At 10 am Friday morning, Apple opened the doors of its latest retail hub—a store in New York’s Grand Central Terminal.

Several thousand people showed up for the opening, many of whom lined up set up camp as early as a day before. We didn’t expect anything less for the event, as it seems that avid Apple fans would line up for the opening of an Apple-manufactured envelope.

The company promised free t-shirts to the first 4,000 visitors. According to Apple PR, it only took a little over two hours for those 4,000 people to pass through the doors.

Recap from the iPhone 4 Event

The Grand Central spot is Apple’s fifth in Manhattan and will become the company’s New York flagship location. Measuring up at 23,000 square feet, it’s one of Apple’s largest stores.

Apple took a different approach with the design of the Grand Central store by departing from its usual high-tech, bare bones, sleek look and making the most of elements from the Grand Central Terminal’s overall existing design.

Grand Central shoppers will be able to make the most of Apple’s wealth of tech-savvy staff via two Genius Bars and 15-minute express Apple product classes. According to the company, more than 300 people will be employed at the new store.

A walk-through tour of the new store: