The internet and GPS: the impact of a solar storm on today’s connected world 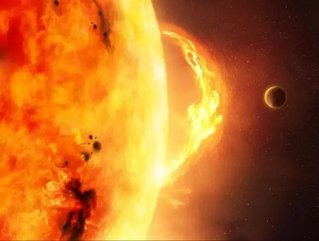 An apocalypse-level solar storm isn't something reserved just for sci-fi. In fact, our planet has already experienced one. In 1859, a solar storm hit that was so large, it would have devastated the modern world.

The storm was dubbed the Carrington Event after British astronomer Richard Carrington, who made the link between the solar activity and geomagnetic disturbances on earth. During the event, the northern lights were seen as far south as Cuba and Rome, and it was said that people in the northeastern USA could read the newspaper by the light of the aurora.

This wasn't the only effect of the storm: some telegraph operators reported sparks leaping from their equipment, with some bad enough to even start fires.

The part of the solar storm that plays havoc with our planet's geomagnetic field is called a coronal mass ejection (CME). Severe solar storms have a similar electromagnetic pulse (EMP) effect as a nuclear detonation, which could cause power outages – this represents the biggest threat to our connected world.

With power outages and disruption to the satellites providing GPS services, we could suddenly find ourselves disconnected and this has far more implications than an inability to check social media.

The first risk is ground-based cables that could burn out, taking out the power to homes and businesses.  This is difficult to repair and could see entire towns and cities without power for extended periods of time. In 1989 an intense solar storm caused the collapse of the entire Canadian Hydro-Quebec power grid, which left 6mn people without electricity for nine hours.

While this affects our homes, it also has an effect on a variety of infrastructure systems as well as on banks and hospitals, meaning we wouldn't be able to use ATMs and critical healthcare would be a risk too.

However, in this hyper-connected world, the real risk is the internet and GPS services going down for extended periods of time. This would present a number of inconveniences such as not being able to pay for anything with card; being unable to use any Transport-as-a-Service apps, such as Uber; airports wouldn't be able to operate; satellite navigation systems wouldn't work and businesses wouldn't be able to access anything stored in the cloud.

A storm the size of the Carrington Event would destroy the entire fleet of satellites in orbit, causing billions of dollars-worth of damage and wiping out global telecommunications. Humans wouldn't even have time to find out that a flare had hit, we'd be suddenly and terribly disconnected.

If a city was to go without power for an extended number of days, maybe even months, businesses could lose huge amounts of money. The American Geophysical Union (AGU) reported in January that electricity blackouts from an extreme space weather event could cost the USA up to US$40bn daily, or more. This figure is based on direct economic costs and doesn't take into account the indirect effects on domestic and supply chain loss.

The best available estimates, from NASA and the America Philosophical Society, suggest a modern Carrington Event would cost humanity US$1-2trn in the first year and that it would take another four to 10 years to achieve full recovery.

The Internet of Things would be under considerable threat from this kind of weather event too. Even now, an outage of GPS and internet services would have huge ramifications on communication and the economy, but look ahead to a world where every vehicle, city and person is connected, and the picture becomes even more bleak.

We're moving towards Mobility-as-a-Service, where very few people will own a car and instead we'll be relying on all manner of connected vehicles that can be called at the touch of a button. These vehicles will speak to one another and the cities around them. They'll rely on the internet to know where they are on the road, where the other cars are and where the people within need to go. Suddenly pulling that connectivity could result in multiple accidents.

You can see the impact on transport infrastructure and the businesses running it in this future scenario, but this level of connectivity is growing in hospitals, banks, offices, logistics companies and a vast array of different industries that we rely on day-to-day.

The Canadian Space Agency is working to understand the modern-day impacts of a solar storm the size of the Carrington Event, as well as the likelihood of one striking in the near future. Scientist Pierre Langlois told CBC News: "I like to compare the risk of space weather to your risk of death.

"So, it's easy for you to say, 'well, I've never died before so I don't think the risk is very high', but you know it's going to happen. For space weather, it's like earthquakes in Canada, it doesn't happen very often – that doesn't mean it can't happen."

Unfortunately, there isn't much businesses can do to protect themselves from a solar storm. Thankfully Carrington-sized events happen once every 500 years and the smaller solar storms don't often cause much more damage than a brief power outage. However, many experts believe it's not a case of ‘if’ a large storm will happen but ‘when’. As we become more connected, there's an increasing need to understand space weather and the impact it has on our planet.