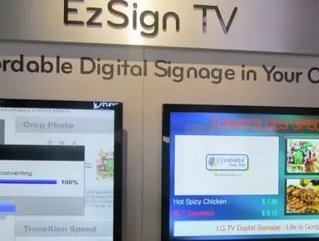 During this year’s International Consumer Electronics Show, we got a private tour of the LG booth and were able to take an up-close and personal look at some of the electronics giant’s newest innovations.

We saw so many amazing LG technologies during our tour that we can’t fit them all in one news post. So we’ve broken it down into two parts, which we’ll share with you today and tomorrow.

Here’s a breakdown of the best things from LG that can be in your hands, living room or lobby by the end of 2012:

The most breathtaking LG unveiling at this year’s CES was its 55-inch OLED HDTV, which was named Best of Show by CNET.

We’ve all heard of LED, but where, exactly does the extra “O” come from? It stands for organic, as in Organic Light Emitting Diode display technology. In simpler terms, that means it uses self-lighted organic pixels to display absolute blacks and amazing color, contrast and clarity, all powered by LG’s proprietary TRIPLE XD Engine.

“The TRIPLE XD Engine’s Dynamic Color Enhancer provides superior color reproduction, while the Contrast Optimizer and the Resolution Upscaler fine tune the OLED TV’s ability to present even the finest details in dramatic fashion,” LG said in a press release.

Incredibly, the LG 55EM9600 OLED TV is only as thick as three credit cards. Seriously—it’s a 55-inch high-definition TV that weighs 16 pounds and is only 4 millimeters thick, thanks to the absence of bulky lamps and bulbs used in traditional LED TVs.

The picture on the OLED TV is incredible—its contrast ratio is over 100,000,000:1, which is 50 times greater than that of LED and LCD display panels.

LG couldn’t provide a projected price point for the OLED TV, but we were told that it is coming to market as early as Q3.

This year, LG is introducing a LED version of its EzSign TV, which used to only be available in LCD.

EZSign TV ‘s versatile hybrid LED TV and digital signage was designed for business owners and LG was the first in the industry to develop software of its kind.

The EZSign TV package comes with the EZSign software and an LG LED TV. Through four steps, business owners can design their own LED in-store signage. Everything can be loaded onto a USB drive for simple installation, and the software includes 53 templates and allows for picture-in-picture layouts that display a live TV broadcast within signage.

Tomorrow we’ll bring you part two of our coverage from LG’s CES 2012 booth!