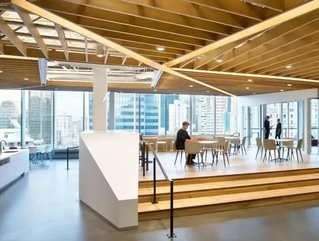 As reported by Business Review Canada, Microsoft recently opened the doors of its Excellence Center in Vancouver. It is a facility intended to create advanced products for the global market, develop British Columbia’s technological talent pool, and inject millions into the local economy.

Business Review USA & Canada speaks to Edoardo De Martin, Director of Microsoft Vancouver, in an exclusive interview about the project, and its current and future impact.

The initial question is: why Vancouver?

“Vancouver is a terrific place for development,” says De Martin. “It is one of the world’s most beautiful cities, has a growing tech ecosystem, offers access to great computer science talent from local universities, contains a diverse workforce, and it’s close to Microsoft’s corporate headquarters in Redmond.

“We have history in British Columbia, with game development operations that go back almost a decade, and there’s a lot more we can do here. While tech is certainly strong in Waterloo, Toronto, and Montreal, Vancouver has some very unique advantages.”

Microsoft made its announcement about the development of the center on May 1st, 2014, but it had been in development for many years. The building was specifically designed to best harness the staff’s creativity – De Martin explains how:

“Teams have plenty of open work spaces that are loosely defined by white boards, couches and other seating areas to use for brainstorms and meetings. There are also a variety of meeting rooms that allow for ‘heads-down, focused work’ and small-to-large team collaboration.

“We have an Espresso Bar, a game room, two 150-person multi-purpose rooms, and an open stairway that connects our two floors. The Microsoft Vancouver office is also home to a maker space called The Garage where employees can step away from their desks and explore creativity through hands-on project work with 3D printing, laser cutting and even embroidery.”

The aim of the center was to gather talented Canadians together, utilizing skills of the best and brightest to help in the development of future technologies. Microsoft Vancouver will bring over 750 working positions to the local area, injecting more than $90 million in direct investments to the city annually. Across British Columbia, the economic impact is likely to be $180 million per year. But what has the center done already for its surroundings?

“Vancouver has a growing tech ecosystem that we are excited to be a part of,” says De Martin. “The video game talent that the city is known for is ideal for 3D development and we’re leveraging that for Microsoft HoloLens development. The potential for mixed-reality tech in redefining Windows 10 and personal computing is tremendous. We’re already seeing the platform impact creativity and productivity in a number of different industries.

“We’re also continuing to bring talented people together to collaborate and innovate. We’re hiring across all teams and have an internship program that brings 50 students per year from top Canadian universities to Vancouver for an entrepreneurial program that empowers them to build apps from the ground up.”

As it develops its technologies, its staff, and the economy around it, Microsoft Vancouver will also be working on some of its best-loved brands and franchises, such as Gears of War and NFL for XboxOne and Windows 10, Skype, OneNote, and applications for HoloLens. De Martin sees only positivity in the future of Microsoft Vancouver, a facility which is already influencing the world around it for the better.

“Our hope is that Microsoft Vancouver will help the global organization continue to expand its development presence in the city,” he concludes. “The center will serve as an engine for technological innovation, drawing on talent, entrepreneurs and innovators to create product breakthroughs while contributing to Vancouver’s tech ecosystem.”