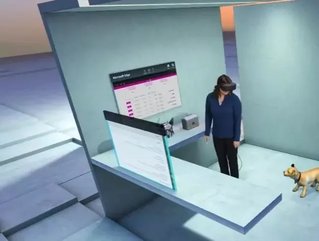 Global technology giant Microsoft will be bringing holographic interfaces to PCs next year after revealing a sneak preview of a Windows 10 update.

In partnership with Intel, the software developer will be launching an update for users to download to their existing PC, combining 2D and 3D apps in virtual/mixed reality setting.

Executive Vice President of Windows and Devices Group Terry Myerson made the announcement in a blog post, commending the partnership with Intel.

He said: “Intel and Microsoft are collaborating on a specification for mixed reality ready PCs and head mounted displays (HMDs). Our shared goal is to enable our hardware partners to build a broad range of devices for the mainstream consumer and business markets. We are working with several partners on the spec today, and plan to publicly release v1 of the spec at the Windows Hardware Engineering Community (WinHEC) conference in Shenzhen in December.

“Next year, we will be releasing an update to Windows 10, which will enable mainstream PCs to run the Windows Holographic shell and associated mixed reality and universal Windows applications. The Windows Holographic shell enables an entirely new experience for multi-tasking in mixed reality, blending 2D and 3D apps at the same time, while supporting a broad range of 6 degrees of freedom devices.”

Watch the video below to see how the new interface will work.